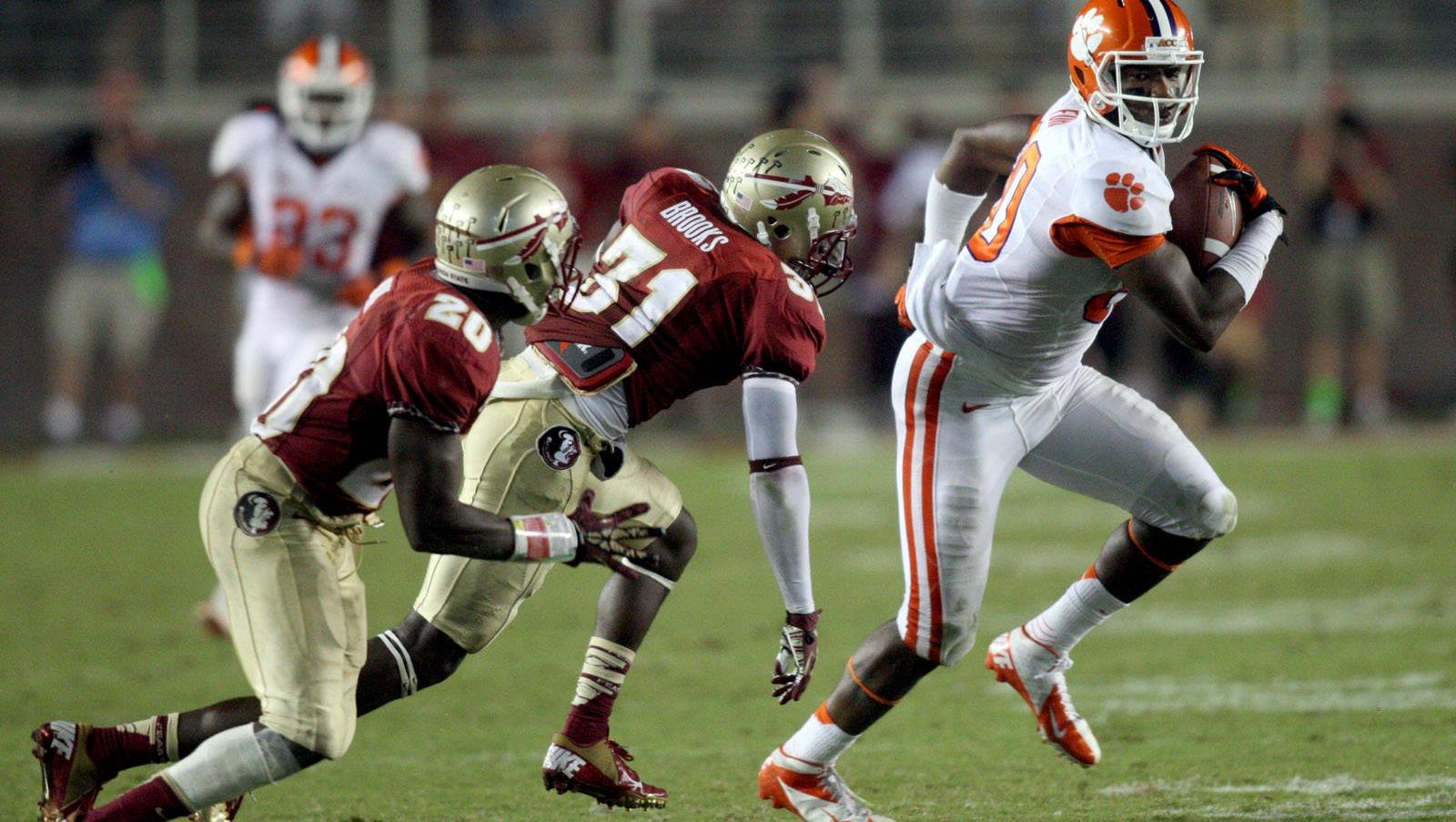 Tigers’ Upset Bid at FSU Slips Away in Second Half

TALLAHASSEE, FL – Up two touchdowns on No. 4 Florida State early in the second half Saturday night, No. 10 Clemson looked clearly the class of the Atlantic Coast Conference. The rest of its night, however, was significantly more humbling.

“Obviously we took a little bit of a step back tonight. … We just didn’t play four quarters,” Clemson head coach Dabo Swinney said afterward. “It’s a great game for us to learn and grow from.”

Florida State rolled up 667 yards total offense, led by 380 yards passing and 102 rushing by E.J. Manuel, who became the first FSU quarterback to throw for 300 yards and rush for 100 since Heisman Winner Charlie Ward did it in 1992.

“I don’t remember him making a bad decision all night,” Seminoles head coach Jimbo Fisher said. “They were mixing up looks and bringing in blitzes from everywhere and he made plays he had to.”

The Tigers (3-1, 0-1 ACC) opened the game with a bang, as Tajh Boyd went over the top on the fifth play from scrimmage and hit DeAndre Hopkins for a 60-yard score. The big play was the longest reception of Hopkins’ career and put Clemson up 7-0 with just 1:26 off the clock.

Florida State struck back just 2:40 later, though, as Lonnie Pryor burst off tackle and through the Tiger secondary for a 13-yard score to even the score.

Clemson regained the lead at 14-7 when Andre Ellington rumbled in from six yards out on the ensuing possession to cap a 10-play, 79-yard drive, and the Seminoles then missed a chance to narrow the gap when Dustin Hopkins’ 44-yard field goal attempt sailed wide right.

After a Tiger punt, FSU needed just four plays to cover 74 yards and tie the game at 14-14 with a five-yard run over right tackle by James Wilder, Jr. just into action in the second quarter.

“When you can’t stop the run you’re going to have a long night against a team like that,” Swinney said.

Clemson soon capitalized on the game’s first big miscue, a fumbled punt by Rashad Greene at his own 30, and scored four plays later.

Boyd found tight end Brandon Ford along the sideline for a 17-yard score to give the Tigers back the lead, 21-14, with 10:06 to go in the second quarter. Clemson long-snapper Phillip Fagjenbaum hustled downfield to recover the Greene fumble.

Clemson stretched its lead to 14 early in the second half after forcing a punt by FSU to open the stanza. On a second-down play, Boyd threw a quick lateral out to Sammy Watkins at his wide receiver post. Watkins gathered himself and fired a strike across the field to a wide-open Andre Ellington for a 52-yard touchdown that gave the Tigers a 28-14 lead with 11:48 to go in the third quarter.

Clemson center Dalton Freeman said after the game there were positives the team could take from its performance up to that point, even if there were few afterward.

“There were several opportunities that we left out there,” he said. “In the first half they didn’t really slow us down, but we kind of sputtered a little bit in the third quarter and that let to bad things in the fourth quarter.  There were a lot of good things, but we’ve got to correct the mistakes.”

FSU quickly cut the deficit back to single digits, as Chris Thompson waltzed in from nine yards out on an option pitch from Manuel to make the score 28-21. After the Tigers had seemingly seized temporary control, the Seminoles needed just three plays and 1:39 to go 75 yards to the end zone.

Clemson stretched its lead back to double figures on its next possession, as Chandler Catanzaro converted a 50-yard field goal that made the score 31-21 with 7:07 to go in the third quarter.

With the kick, Catanzaro broke Obed Ariri’s school record for consecutive field goals made with his 15th straight. Interestingly, the record-breaking kick was also the longest of Catanzaro’s career. Ariri’s record had stood at Clemson since 1980.

The Tigers’ momentum was short-lived, however, as Lamarcus Joyner returned the ensuing kickoff 90 yards to the Clemson 10. And two plays later, Manuel found Greene in the corner of the end zone to cut the deficit to 31-28.

“(Joyner’s) kickoff return was huge, just a huge momentum swing in the game,” Swinney said. “It kind of lit a fire for them.”

After Clemson failed to move the sticks, FSU took its first lead of the game with a deep ball from Manuel to Rodney Smith in the corner of the end zone for a 29-yard touchdown and a 35-31 lead.

After a Tiger three-and-out, the Seminoles stretched their lead to 42-31, as Wilder rumbled in from five yards out for a touchdown. He carried three straight times for 44 yards to cap a seven-play, 77-yard drive.

FSU led by as many as 18 after a Thompson 27-yard touchdown run, but Boyd and Ford hooked up again with 2:11 left in the game for a three-yard score to provide the final margin.

Despite Clemson’s struggles to slow down the Seminole offense, freshman defender Travis Blanks, who finished with eight tackles, said FSU did little that surprised the Tigers on the night.

“They ran everything we practiced,” Blanks said. “Toward the end we just didn’t fit a few things up right. They didn’t do any trick plays on us. There are a lot of things technique-wise that we just need to watch film on and fix.”

With another road game up next Saturday at another division foe in Boston College, Swinney says the Tigers have little time to spend dwelling on the loss.

“The season starts tomorrow,” he said. “You have to go on the road and win, and we didn’t get that done today. We have another opportunity next week to go to Boston College. … We’ve got a lot of football left.”