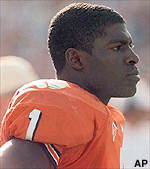 Tigers Try to Stay in Title Hunt Against Georgia Tech

The fifth-ranked Clemson Tigers look to continue their dream season when they host the Georgia Tech Yellow Jackets in an ACC matchup on Saturday.

The Tigers (8-0, 6-0) are one of five unbeaten teams remaining in the nation, after a 38-24 victory over North Carolina. Clemson managed to win the game despite an ankle injury to star quarterback Woodrow Dantzler, who left with 6:33 remaining in the first half.

“We overcame a lot of adversity,” Clemson coach Tommy Bowden said. “That says a lot about our kids. Sometimes that takes years to build.”

Dantzler, who enters Saturday’s game ranked sixth in the nation in total offense at 272.5 yards per game, is expected to be ready to play against Georgia Tech. He was replaced by redshirt freshman Willie Simmons, who matched a school-record with four touchdown passes.

“To set a Clemson record for touchdown passes in a big road game is a credit to him,” Bowden said of Simmons. “To come off the bench and play the way he did is something special.”

The main reason the Tigers have been able to get so much production from their quarterbacks is their offensive line, which has been getting the job done. Clemson ranks sixth in the nation with 217.8 yards rushing per game, and it has scored 30 TDs on the ground.

“Right now they’re playing at a pretty good tempo,” Bowden said. “The pros aren’t beating down the doors for those five guys up front, so to me that means they’re playing with really good effort and technique. And we’ve become more aggressive in the last three or four games.”

Tech (5-2, 3-2), meanwhile, poses Clemson one of its toughest challenges of the season. After beating up on opponents with a combined record of 19-37 in their first eight games, the Tigers face a Georgia Tech team that is looking to play in its fourth straight bowl game. The Yellow Jackets need one more victory to be eligible for a bowl, giving them four in a row for the first time since the 1950’s.

After a slow start, the Yellow Jackets are looking for their fourth straight win on Saturday. Some of Georgia Tech’s success can be attributed to receiver Kelly Campbell, who had six catches for 127 yards in a 45-10 rout of Duke last week. Campbell, who owns the Georgia Tech record for TD receptions, is tied for second on Tech’s career list in receptions (115) and third in receiving yards (1,807).