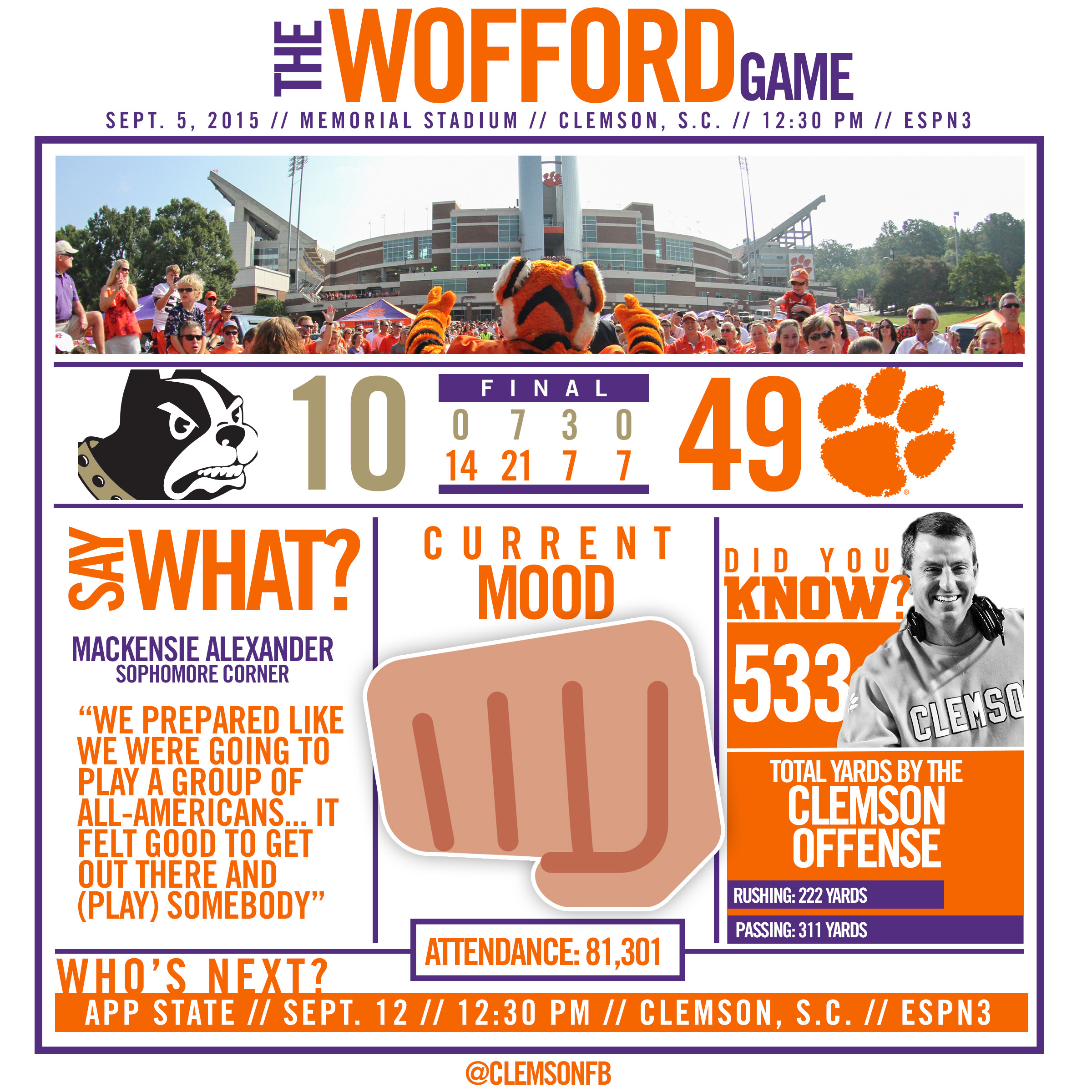 CLEMSON, S.C. – The No. 12 Clemson Tigers improved to 7-0 in home openers under head coach Dabo Swinney with a convincing 49-10 win over Wofford Saturday in front of a crowd of 81,301 fans at Memorial Stadium.

The Tigers came out quickly, with sophomore quarterback Deshaun Watson leading an 11-play, 75-yard drive culminating with a four-yard touchdown reception by Mike Williams. During the touchdown completion, Williams appeared to hit his head against the goalpost in the east endzone. Williams suffered a neck injury and was transferred to Oconee Medical Center for further medical attention. He showed up in the locker room after the game, much to the delight of his teammates.

Defensive coordinator Brent Venables’ unit was one of the best in the nation a year ago and, despite several starters now playing in the NFL, picked up right where it left off. Wofford did not pick up its first first down until late in the second quarter, as the Tiger defense posted six consecutive three-and-outs to start the season.

“Our guys in the secondary did a great job,” Swinney said. “I’m really proud of the defense. When you have as many young guys as we’ve got, you’re going to have a few first-game mistakes, but I am really proud.”

Offensively, Watson led touchdown drives on the first two possessions and Clemson scored on five of its first seven drives, building a 35-0 lead.

Following a miscue on a Clemson punt return, the Terriers put together a 10-play, 2:38 drive ending with a one-yard touchdown run by Chase Nelson as time expired in the first half.

After halftime, Wofford drove 55 yards on eight plays to set up a 37-yard field goal by David Marvin and cut the score to 35-10.

Sophomore Artavis Scott returned the ensuing kickoff 39 yards and Clemson punched in its sixth touchdown of the day with a Wayne Gallman one-yard plunge six plays later to take a commanding 42-10 lead early in the third quarter.

Watson finished the day 18-22 passing for 194 yards and two touchdowns, while Gallman led all rushers with 92 yards on 14 carries and two scores. First-year freshman Ray-Ray McCloud hauled in eight catches for 80 yards and Scott added six grabs for 75 yards and a score.

“I want to thank the fans,” Swinney said. “The environment we had today was incredible. I appreciate that support, and the energy was awesome.”

The Tigers return to action next Saturday at home, facing Appalachian State at 12:30 p.m. The game will be streamed live by ESPN3 and is officially sold out.

Watch our exclusive one-second series — re-live the day with the best shots from #WOFvsCLEM. 🐅🐾💯🔥 pic.twitter.com/KRaQ1N2cUQ