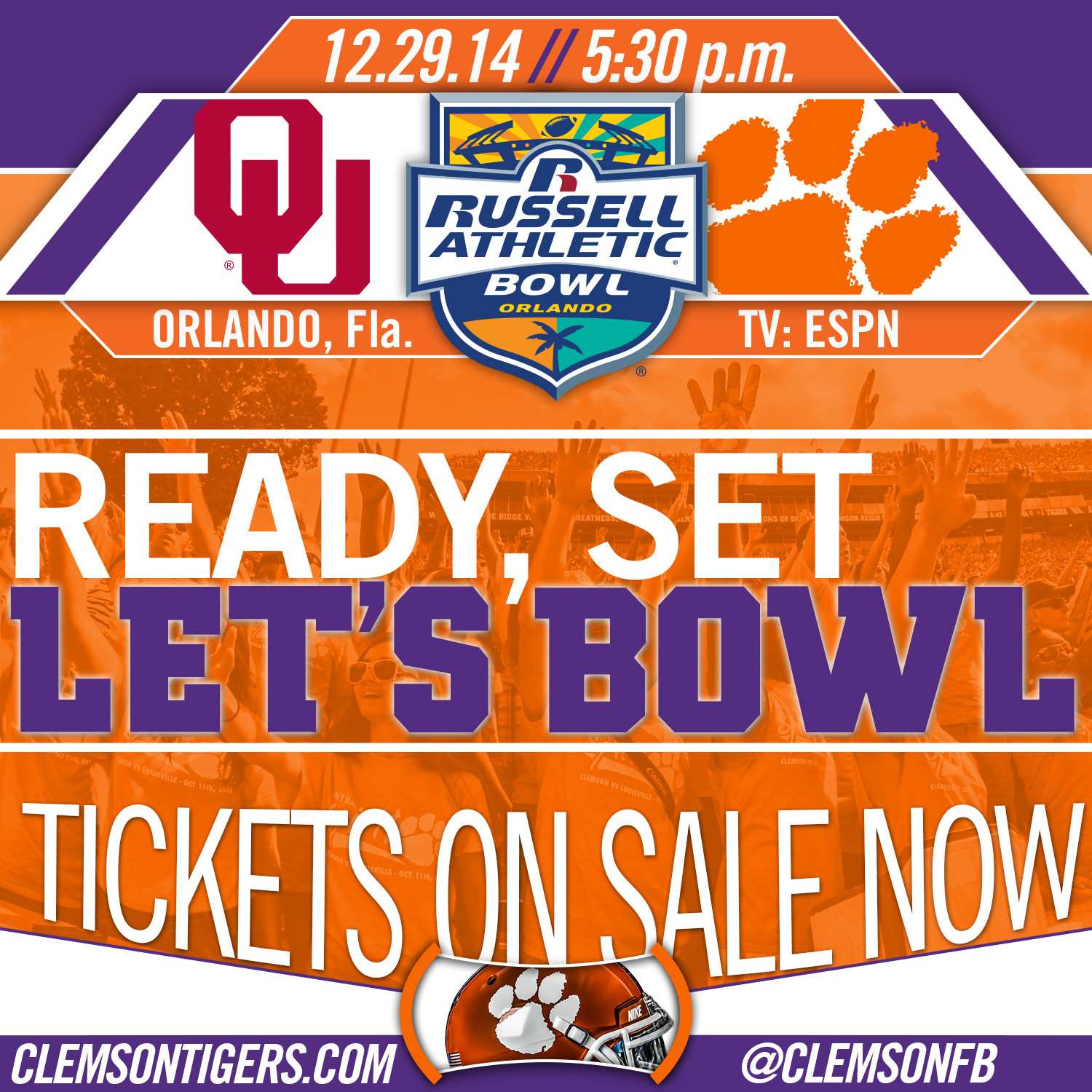 CLEMSON, S.C. – The No. 18 Tigers were extended an invitation Sunday to play No. 24 Oklahoma in the Russell Athletic Bowl in Orlando, Fla. The contest will be played on Monday, December 29 at 5:30 p.m. at the Orlando Citrus Bowl Stadium.

This will be Clemson’s third appearance in the Russell Athletic Bowl (formerly the Tangerine Bowl and Champs Sports Bowl) and the sixth time Clemson has played in a bowl game in Orlando. It is the first visit since a 19-10 victory over Colorado in the 2005 Champs Sports Bowl.

All ticket requests placed by IPTAY members for the 2014 Russell Athletic Bowl will be fulfilled. Clemson receives approximately 10,000 tickets for the Russell Athletic Bowl, and additional tickets are available immediately HERE through ClemsonTigers.com or via phone at 1-800-CLEMSON beginning Monday at 8 a.m. All tickets will ship the week of December 15 via UPS.

Student tickets will go on sale Thursday, December 11 at 8 a.m. in the ticket office at Memorial Stadium (next to Gate 9). Tickets can be purchased with cash or credit card and will be distributed on a first-come, first-serve basis, so please purchase tickets with your friends to sit together.

Tickets are on sale now through ClemsonTigers.com with pricing breakdowns as listed…

All parking passes for the Russell Athletic Bowl can be purchased online at RussellAthleticBowl.clickandpark.com or by calling 866-330-7275. Order your parking pass now, as lots are expected sell out.

This will be the fourth meeting between Clemson and Oklahoma, the first since Clemson won 13-6 in the Citrus Bowl played on Jan. 1, 1989. Oklahoma has a 2-1 lead in the series.

Clemson, 9-3 overall and 6-2 in the ACC, enters the bowl season having won eight of its last nine games. The Tigers are ranked No. 17 by the College Football Playoff, No. 18 by Associated Press and No. 18 in the coaches poll. Clemson is attempting to finish in the top 25 in the final polls for the fourth straight year, something the program has not done since a six-year streak from 1986-91.

Clemson has the No. 1 defense in the nation, allowing 259.6 yards per game. The Tigers are also first in the nation in tackles for loss, yards-per-play allowed, sack yardage, tackles for loss and third-down conversion percentage defense. Clemson is second in pass defense, seventh in rushing defense and eighth in scoring defense.