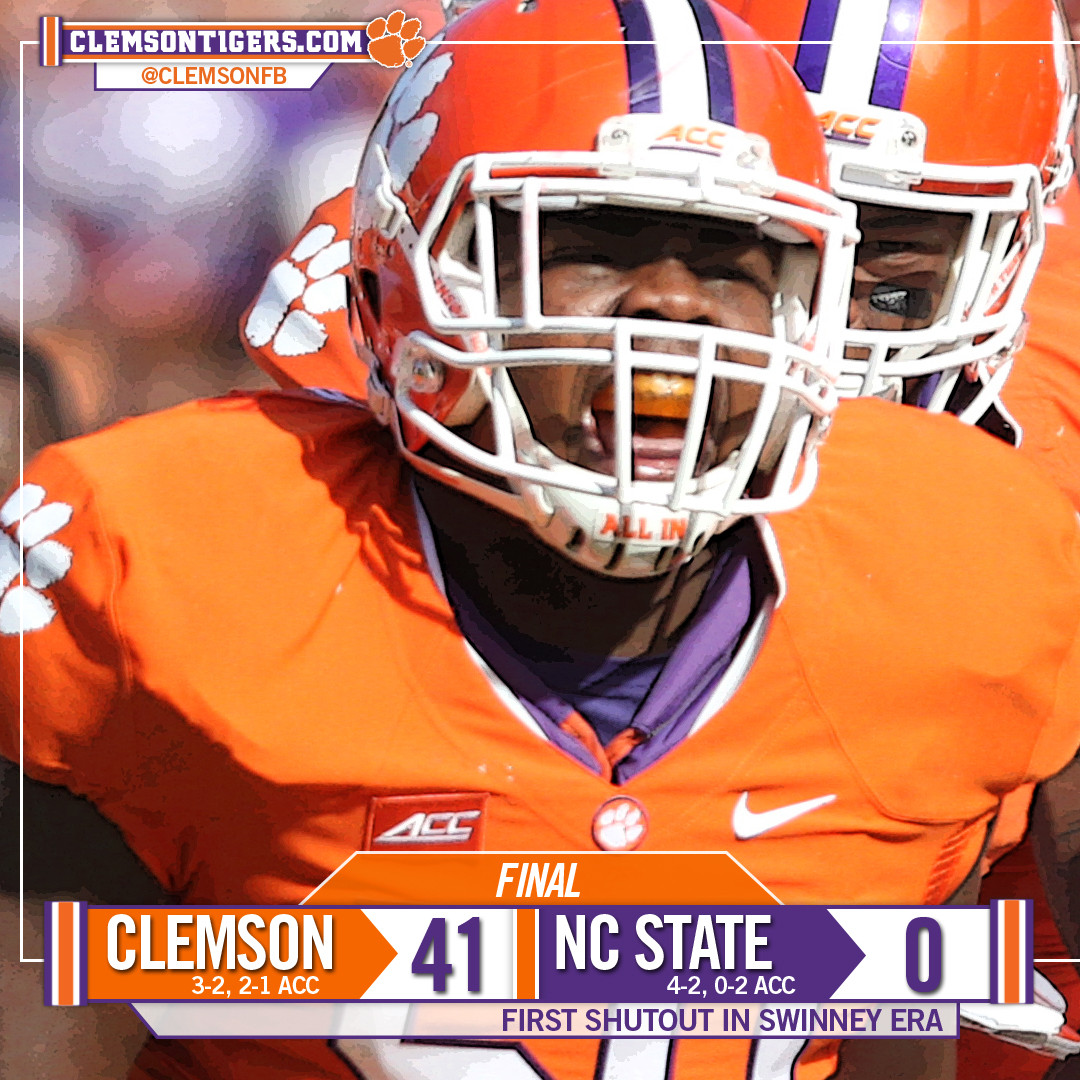 CLEMSON, S.C. – Clemson recorded its first shutout in the Dabo Swinney era, as the defense responded to the challenge set by the coaches in practice all week to limit big plays from opposing offenses, blanking NC State 41-0.

With the win, the Tigers moved to 3-2 overall and 2-1 in the ACC. They conclude their three-game home stretch against Louisville on October 11 at 3:30 p.m.

It was the Tigers’ first shutout since 2008 against SC State and the first over an ACC opponent in 16 years.

“Our guys were invested and had a great week of practice after a humbling second half last week,” said Defensive Coordinator Brent Venables. “Our guys played with incredible passion. I loved the intensity and discipline these guys played with.

“I’m happy that they’ve finally been rewarded for all their hard work. Our guys have really bounced back and had a strong performance. Offense, defense and special teams all complemented each other.”

On offense, it was business as usual, as Deshaun Watson opened the game with a seven-play, 82-yard drive, with a 56-yard touchdown pass to wide receiver Mike Williams, setting the tone for the rest of the day. Watson finished 17-29 for 267 yards and two touchdowns, while adding two rushing touchdowns and running for 62 yards. Clemson also found a spark in the running game outside of Watson, as freshman running back Wayne Gallman finished with 13 carries for 58 yards, averaging 4.5 yards per carry.

On his 20th birthday, Williams received both of Watson’s gift-wrapped touchdown passes of 56 and 31 yards, leading all Clemson receivers with 155 receiving yards on the day. He continued to establish his presence as a dynamic threat in the Tigers’ receiving corps. Clemson’s offense finished with 493 total yards, including 226 rushing yards, averaging 4.5 yards per carry. Perhaps the biggest stat of the day was the lack of turnovers by the Clemson offense.

“We ran a balanced offense today,” said Watson. “I give all of the credit to our offensive line, the running backs found holes and our receivers made me look good. We’re getting better each week. I give the offensive line all the credit. I love those guys.”

Offensive Coordinator Chad Morris praised the offense for its balanced attack against the Wolfpack and was pleased with the Tigers’ performance, especially in the turnover battle, where Clemson took care of the football, committing zero turnovers.

“I think what you’re seeing is a group of guys getting better every week,” stated Morris. “No turnovers is huge, we stress that all the time, and we want to run the football. We want to be more effective in the run game and really challenge our offensive line, so I’m really proud of those guys and how they responded.

“I’m just proud of our great team effort overall. Hard to shut anyone out.”

The defense faced a challenge in quarterback Jacoby Brissett, who entered the game leading the ACC with 13 touchdown passes. The Tigers stepped up to the challenge, holding NC State to only 36 total yards of offense in the first half. The front seven was spearheaded by Vic Beasley, who tied Clemson’s all-time sack record of 28 while collecting a forced fumble and return for a touchdown. Beasley needs one more sack to move into first place on the all-time sack list past Michael Dean Perry and the late Gaines Adams.

Clemson’s defense also forced three turnovers on the day, with forced fumbles by Robert Smith and Kellen Jones along with Beasley’s. The defense refused to yield all game long, holding the Wolfpack to 154 total yards of offense. Grady Jarrett led all tacklers with seven, followed by Smith, Stephone Anthony and Jones, who each had six tackles.

“Definitely built off of last week, showing our progress over the last few weeks as a whole and keep trying to get better from here,” said Jarrett. “We prepared for it all and we played what we had and had a really strong game on defense.”

More than anything, the Tigers’ performance in all aspects of the game was all Swinney could ask for from his team, and they didn’t disappoint by any means.

“This is my first shutout as a head coach, so this is extra special for me,” said Swinney.