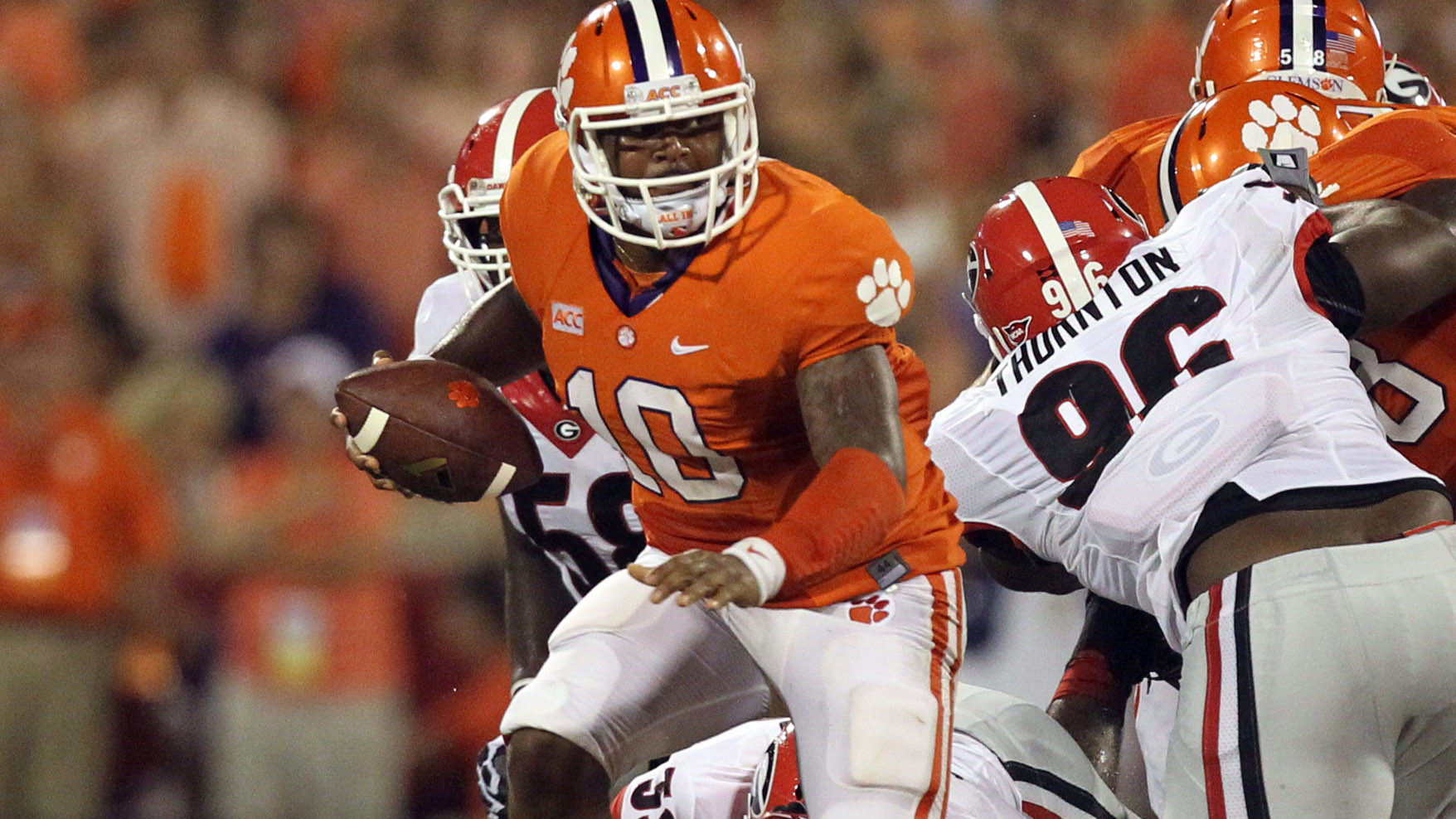 But that factoid had little to do with what transpired on the field, according to Tiger head coach Dabo Swinney.

“We’ve got all the respect in the world for the SEC, but it’s not about a league – it’s about a program, bottom line” Swinney said. “We love being in the ACC and we’re very proud of all that stuff, but we’re worried about Clemson. And these guys don’t feel like they take a backseat to anybody.”

A back-and-forth affair throughout, the No. 8 Tigers opened up a double-digit lead in the fourth quarter on Stanton Seckinger‘s nine-yard touchdown catch from Tajh Boyd and hung on to defeat the No. 5 Bulldogs in the first season-opening meeting of top-10 teams in school history.

Clemson had defeated No. 7 LSU 25-24 in the Chick-fil-A Bowl to end last season and set up its shot to make history against Georgia.

Seckinger’s decisive score was fitting in that his jersey number is No. 81, and it came on the night Danny Ford, the legendary coach who led Clemson to its only national championship in 1981, was inducted into the Ring of Honor. It also came against the team that was arguably the Tigers’ fiercest rival in that era.

“This was a special night for Clemson,” Swinney said. “I’m happy for Coach Ford to finally be inducted into the Ring of Honor. It was awesome to see all of our former players back tonight, too. That is Clemson. This was just an awesome night.”

After the offenses traded three-and-outs to open the game, Clemson marched 76 yards and found the end zone on a four-yard burst by quarterback Tajh Boyd for a 7-0 lead.

Georgia needed exactly 12 seconds to tie the game, however, as Todd Gurley took a pitch on the next snap from scrimmage and raced 75 yards to pay dirt.

Not to be outdone, Clemson needed exactly 12 second to jump back on top, as Boyd found Sammy Watkins on the ensuing play from scrimmage, and Watkins outran the Georgia defense for a 77-yard touchdown.

But Georgia got rushing touchdowns by Keith Marshall and Quayvon Hicks to make it 21-14, and when Clemson’s next drive fizzled with the Bulldogs having scored on three straight possessions, the Tigers badly need someone to make a play on defense.

Vic Beasley rose to the occasion.

On third-and-5 from the Georgia 19, the junior defensive end came off the end like he was shot out of a cannon and took down Aaron Murray from behind for the first of four Tiger sacks on the night.

“Our defense was needing a spark from somebody, somebody to make a big play, and I believe I was the one to make the big play that sparked us,” Beasley said.

On the Bulldogs’ next drive, it was Stephone Anthony who came up with the big play for the Clemson defense.

After Georgia had netted one yard on its first two plays, Anthony broke through the line and stripped Murray of the football. Spencer Shuey fell on the fumble on the 16, and the Tigers had the momentum-shifter they needed.

Five plays later, Boyd scored on a two-yard touchdown run to tie the game at 21-21.

Clemson’s defense came up with another big play before halftime, as Brent Venables dialed up a zone blitz and defensive end Corey Crawford, who had dropped into coverage, picked off Murray for the first interception of his career to keep the game tied going into halftime.

“It was a zone blitz and me just doing what I’m coached to do by Coach (Marion) Hobby and Coach Venables – cutting off the dig (route),” Crawford said.

After another strong stand by the Tiger defense to open the second half, Clemson promptly regained the lead on a 31-yard touchdown on a wheel route from Boyd to running back Zac Brooks.

Georgia tied the game right back up, 28-28, when Gurley rumbled in from 12 yards, but Clemson retook the lead on its next possession on a 24-yard field goal by Chandler Catanzaro.

Georgia had a first-and-goal from the 5 on its ensuing possession and looked set to take back the lead, but Clemson’s defense hunkered down and held the Bulldogs out of the end zone on three straight runs.

Georgia lined up to kick a chip-shot field goal that would have tied the game, but the snap was high and the Bulldog holder was forced to fall on the ball, which turned it over on downs and preserved Clemson’s 31-28 lead.

“I felt like that was huge,” Crawford said. “That was another turning point in the game because it looked like they were going to gain momentum.”

The Tigers extended their lead to double-digits – the only double-digit lead of the game – on the ensuing possession, as Seckinger hauled in his second career touchdown.

Officials initially ruled that Seckinger had stepped out of bounds at the two, but replay clearly showed he had tight-roped the sideline and broken the plane.

“He is just unbelievable talent,” Boyd said of Seckinger. “He’s a younger guy so he just has to continue to keep building. I am very confident in him. Obviously Coach (Chad) Morris is confident in him for him to even be an option in that situation. I don’t really know why it was under review. I jogged off the field like it was a touchdown.”

Georgia pulled within three, 38-35, on a Murray one-yard run with 1:19 to play, but Clemson’s Martavis Bryant – who had dropped a pair of key passes in the game – recovered the Bulldogs’ last-ditch onside kick attempt to seal the victory.

“That was the biggest catch of the game right there,” Boyd said.

At No. 5, Georgia is the third-highest-ranked foe Clemson has defeated in its history, and the Tigers snapped a five-game losing streak to the Bulldogs in the process.

“It’s amazing,” defensive tackle Grady Jarrett said. “Just a game that was as highly touted as this, (ESPN) GameDay (in town), everything. People thought we were going to come out and lay an egg, and it’s just an amazing feeling. … The sky’s the limit for us, and we’re just ready to keep on moving forward.”

Clemson will host South Carolina State at 12:30 p.m. next Saturday before having a bye week ahead of a Thursday night game at NC State on Sept. 19.