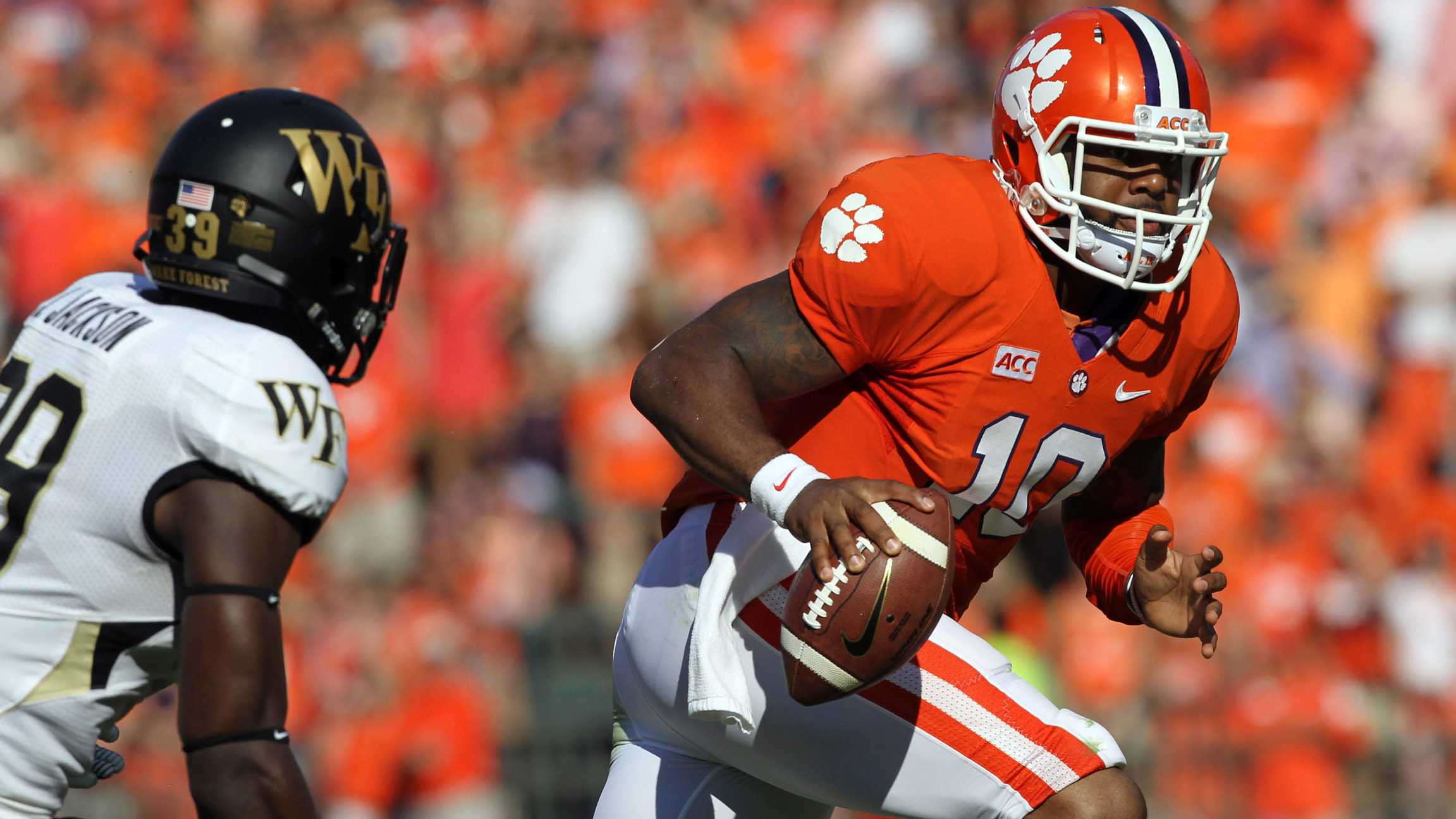 CLEMSON, SC – Chad Morris walked past the throng of reporters huddled around a jovial Tajh Boyd in the tight tunnel outside Clemson’s locker room after its 56-7 win over Wake Forest on Saturday, and the two pointed at each other in sync and nodded their heads in the other’s direction.

Only that gesture was exchanged between the offensive coordinator and his senior quarterback, but the message was clear.

After Morris said it took 59 plays for the Tigers’ offense to find its rhythm last week against NC State, he had preached the importance of a fast start against the Demon Deacons.

“That was the biggest thing that I wanted to do,” Morris said. “It was a huge focus – to pick up where you left off, to get Tajh in a rhythm, to get this offense in a groove that we saw against Georgia and get them back going again.”

It took Boyd and company exactly three plays from scrimmage to reach the end zone and, for all intents and purposes, three drives to put the game away.

Third-ranked Clemson (4-0, 2-0 ACC) quickly quashed any doubts about being upset on its Homecoming by taking a 21-0 lead less than halfway through the first quarter. It scored five more touchdowns after that en route to notching its 12th consecutive double-digit win over an unranked foe, the second-longest active streak in the nation behind only Alabama.

Boyd completed 17 of 24 passes for 311 yards and three touchdowns, and was also the Tigers’ leading rusher with 17 carries for 69 yards and another score, while Sammy Watkins was the leading receiver with six grabs for 113 yards and a score, as Clemson rolled up 27 first downs and 567 yards of offense.

Clemson needed just three plays for the fun to begin, as Boyd hit Watkins down the sideline on a pump-and-go for a 64-yard touchdown to make it 7-0 just 46 seconds into the game.

“We did a great job watching film and just practicing during the week, and we knew that their cornerbacks liked to bite on certain things,” Watkins said. “He bit on the pump fake, and Tajh threw a great pass.”

Wake defensive back Merrill Noel was flagged for pass interference on the play, but Watkins broke free from his grasp, hauled in the long pass and outran A.J. Marshall the final 35 yards to pay dirt, as the Tigers took just three plays and 36 seconds to cover 82 yards on the drive.

Clemson went with a somewhat more methodical approach on its second drive, but the result was the same. The Tigers marched 63 yards on 10 plays, took 2:50 off the clock and found the end zone on a 10-yard burst by Zac Brooks, who scored his first career rushing touchdown on the play to make the score 14-0.

“It felt good because I’d had a (receiving touchdown) from Tajh, but I’ve got to share that touchdown,” Brooks said. “Being a running back, I wanted a rushing touchdown because that’s me and our O-line right there. The O-line did an awesome job today. I can’t say enough about them because we went deep in the O-line (depth chart), and they were still blocking their tails off.”

The Tigers once again had a three-play touchdown drive on their next possession. Faced with third-and-5 at their own 25, Boyd swung a pass out of the backfield to D.J. Howard, who caught the pass, spun up the field, juked a Wake defender at the corner and raced 75 yards to make it 21-0 with 7:32 left in the first quarter.

“He had a great run, and that cut made a few guys miss,” head coach Dabo Swinney said. “He’s one of the fastest guys we have, so when he gets into open space there aren’t a lot of guys who can catch him.”

Howard’s touchdown was the longest reception by a Clemson running back since C.J. Spiller had an 83-yard touchdown catch against Duke in 2008.

On the touchdown, Boyd became Clemson’s all-time leader in total yardage. He came into the game needing 173 yards to surpass Charlie Whitehurst, who had 9,591 from 2002-05, and the scoring play to Howard gave him 201 already on the day.

Wake broke on to the scoreboard with 1:17 left in the first quarter on a 10-yard pass from Tanner Price to Sherman Ragland to make the score 21-7.

After three straight three-and-outs on offense, Clemson found its groove again and marched 67 yards on seven plays, and found the end zone on a 2-yard plunge by Boyd on fourth-and-goal. The score made it 28-7 with 4:57 to go until halftime.

Boyd used his arm for the Tigers’ next touchdown, slinging a bullet to Mike Williams for a 14-yard score. The true freshman made a sliding grab in the end zone for his first career touchdown to make it 35-7 with 29 seconds to go in the first half.

After Travis Blanks recovered a fumble in Wake territory early in the third quarter, the Tigers covered 46 yards on 10 plays and found the end zone on a 1-yard run by C.J. Davidson to make it 42-7. The touchdown was the first of the former walk-on’s career.

Another Tiger notched his first career touchdown on their next drive, as freshman Jordan Leggett hauled in an 18-yard pass from Cole Stoudt – who had taken over for Boyd at that point – to make the score 49-7.

Davidson scored his second career touchdown on the Tigers’ next possession, as he dove up and over the line from 1 yard out to cap a 12-play, 56-yard drive and make the score 56-7.

In all, three Tigers scored their first career touchdowns – Williams, Davidson and Leggett – while Brooks notched his first rushing touchdown and Howard got his first receiving touchdown.

“That’s what we try to do,” Boyd said. “We don’t just want one guy to go out there and score that many touchdowns. We try to make sure that everybody eats a piece of the pie, and it was great for those guys. They are the future of the program, future of the team, and we’ve got to make sure they build their confidence. So it was great to go out there and see them perform and just be a weapon for us. The best thing we can have about this team is depth, and I feel like we have that right now.”

Clemson’s defense also did its part, holding Wake Forest to 222 yards of offense and only allowing the Deacons to convert 2 of 14 third downs.

“What a great team win,” Swinney said. “We played a complete game for all four quarters.  There were no lulls in our play. We played a ton of guys, and they played to our standard of excellence. Our team is growing and improving. We played outstanding in all three aspects of the game. I’m really pleased with the growth, and it was just a great day for our football team.”