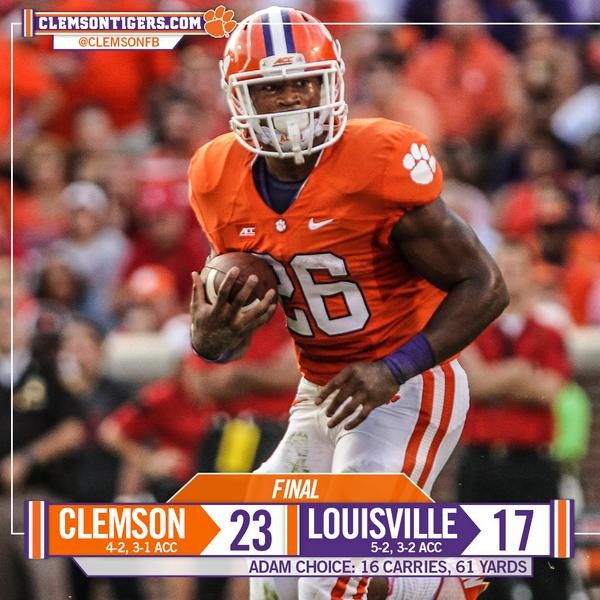 CLEMSON, S.C. – The No. 25 Clemson Tigers pulled out a 23-17 victory over Louisville with their backs against the wall, holding the Cardinals on a last-minute, goal-line stand to preserve a hard-fought victory. The Tigers improved to 4-2 overall and 3-1 in the ACC in the first-ever meeting between the two.

With freshman quarterback Deshaun Watson forced to leave the game early due to a broken finger, senior quarterback Cole Stoudt stepped in and went 20-33 passing for 162 yards. Freshman Artavis Scott led all receivers with 10 receptions for 66 yards, while freshman Adam Choice led all rushers with 61 yards on 16 carries.

Head Coach Dabo Swinney praised Stoudt for his resiliency coming off a shoulder injury last week and appreciated how his senior led the team once Watson went down in the first half.

“He didn’t take a snap at practice all week because of his shoulder,” admitted Swinney. “Instead of pouting and crying, all he did was choose to have a good attitude and go back to work.

“Cole told me, ‘Coach, I’ll be ready when you need me.’ It just does your heart good to see a young man rise up and be there for his teammates. I couldn’t be more proud of him.”

Clemson’s defense and special teams play won the game for the Tigers, which included a 72-yard return by Adam Humphries on the Cardinals’ first punt of the game. With the return, Humphries became the first Tiger to return a punt for a touchdown since C.J. Spiller scored on a 77-yard punt return against Boston College in 2009.

Another bright note on special teams, placekicker Ammon Lakip made all three of his field goals, which led to praise from Swinney.

“He went 3-3 with one off the backboard,” joked Swinney about Lakip’s 40-yard field goal off the right upright that gave Clemson the lead for good on the last play of the third quarter. “I think he called that one.”

Garry Peters made arguably the biggest play of the game when he sacked Reggie Bonnafon and forced a fumble, which was recovered by Tavaris Barnes in the endzone for the go-ahead touchdown in the second quarter to put the Tigers ahead 14-10.

Vic Beasley also recorded a sack to bring his career total to 29 and set Clemson’s all-time sack record, moving ahead of Michael Dean Perry and the late Gaines Adams.

“It’s definitely special to be among names like Michael Dean Perry and Gaines Adams,” said Beasley. “They really helped set the example for me.”

Defensive Coordinator Brent Venables couldn’t say enough about how his defense performed at every turn during the game, coming up with the big plays when they needed them, especially on Louisville’s final drive.

“They played with everything they got, and we needed it tonight,” said Venables about the Tigers’ stout defensive performance. “These guys showed resiliency, toughness and courage. Our guys were ready for it, and I’m really proud of them.”

In his first career start in place of Tony Steward, sophomore Ben Boulware led the defense with 10 tackles, including a sack and game-high three tackles for loss. Safety Jayron Kearse made a game-saving tackle on James Quick after a 73-yard catch and run, which would have tied the score and put the Cardinals ahead 24-23 with a successful extra-point attempt.

“That’s something we go through every day in practice,” said Kearse. “We have to get to the ball.”

With Louisville out of timeouts, the Clemson defense kept the Cardinals out of the endzone on the final drive, stuffing a potential game-winning touchdown run on second down and forcing the Cardinals to spike the ball on third down.

On fourth down, Will Gardner’s pass was broken up by defensive tackle DeShawn Williams, sealing the Tigers’ victory. It was a day where the game was put into the hands of the defense, and it responded in spectacular fashion.

“That’s just heart,” added Swinney. “That’s what it’s all about right there, seeing a group of guys play like a family that have each other’s back.”