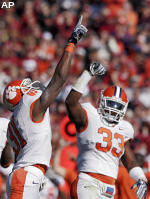 Gamecocks captain Moe Brown and fellow senior Garrett Anderson chased an elusive Spurrier, the 1966 Heisman winner at Florida, with a water bucket and eventually doused their coach after beating rival No. 15 Clemson 34-17 Saturday.

Spurrier’s rule is save such showers for championships. Even the head ball coach had to smile when Brown pointed out the Gamecocks won the Palmetto State title.

“I figured I only got one game left, he can’t be too mad at me,” Brown said. “We said we won the state championship and he gave me a hug.”

Besides short-circuiting another late-season swoon, the Gamecocks (7-5) most likely earned a bid to one of the Southeastern Conference’s mid-tier bowls like the Music City or Chick-fil-A.

The win came mostly because South Carolina’s defense slowed a Tigers attack that had averaged more than 40 points and 415 yards during its six-game win streak.

Clemson’s run brought it an ACC Atlantic Division crown and a spot in next week’s league title game against Georgia Tech. The Tigers (8-4) had few answers for South Carolina’s rested and raring-to-go defenders.

Clemson star C.J. Spiller had his NCAA record-setting seventh career kickoff return touchdown to start the game. He managed only 18 yards on the ground after that.

Spiller battled an illness throughout, saying he felt sick to his stomach. Clemson coach Dabo Swinney said Spiller “tweaked” his groin but should be fine by next week.

By the end, backups Jamie Harper did most of the backfield work.

Clemson had won two straight, six out of seven and 10 of 12 against the Gamecocks, who had only one victory over the Tigers in the last 10 games at Williams-Brice Stadium.

Clemson had 260 yards of offense. Spiller finished with 18 yards rushing and 19 receiving.

The Tigers head into next week’s championship with several questions to answer. No. 1 among them: What happened to the offense?

Swinney says the team will respond with character and hard work.

“Our next goal is to try and win the ACC,” Swinney said. “We will turn the page.”

After Spiller struck for his 88-yard kickoff return just 20 seconds in–it was his fourth such score this season–the orange-clad fans among the 80,574 in the stands had little reason to doubt it’d be another day to celebrate.

There were interceptions, fumbles and penalties galore that helped South Carolina score 17 points in the opening half, more than it had in any of its last five games.

“We were moving the ball down the field and moving on their defense and then we would kill ourselves,” Clemson tight end Michael Palmer said.

South Carolina made the Tigers pay.

Kyle Parker’s first interception in three games followed on Clemson’s next drive, with freshman DeVonte Holloman returning it 54 yards to the Tigers 11. Garcia connected with tight end Weslye Saunders for the go-ahead score from 9 yards out.

If you needed proof this was the Gamecocks’ day, it came a series later.

Ricky Sapp had a roughing penalty on a punt to keep another Gamecocks drive going. That one ended with Spencer Lanning clanging a 47-yard field goal off the right upright.

Garcia clinched things in the third quarter with a 14-yard touchdown throw to a wide-open Tori Gurley.

Spiller fumbled on the Tigers’ first possession of the second half, and Clemson got just one first down its next three series.

The victory ended what looked like another late-season swoon in Spurrier’s fifth year as Gamecocks coach.

In 2007, South Carolina opened 6-1 and lost its last five. A year ago, a 7-3 start was ruined by three straight defeats down the stretch.

The Gamecocks were 6-2 a month ago after beating Vanderbilt 14-10. Losses to Tennessee, Arkansas and top-ranked Florida had Spurrier fielding uncomfortable questions about playcalling and his future.

Spurrier, testily at times, preached patience and reminded critics his team’s best days were down the road. That showed against the Tigers.

Hollomon’s game-changing interception was the first of his career. Defensive back Stephon Gilmore, Holloman’s teammate at South Pointe High last fall, was used successfully in a wildcat look that set up Maddox’s tying touchdown.