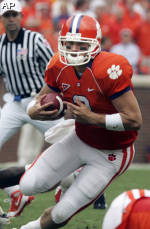 Spiller had a 77-yard return score, kicker Richard Jackson added a school-record tying six field goals and Clemson’s defense bottled up the Eagles in a game that took nearly five hours to finish because of two rain delays.

Spiller, who finished with 219 all-purpose yards, didn’t return after the second stoppage. Athletic spokesman Tim Bourret said Spiller hurt his foot, but the injury was not considered serious.

The teams have played tight, dramatic football since the Eagles joined the league in 2005. Two of their four contests were settled in overtime, another put BC in its first ACC title game while last year’s Clemson victory started interim coach Dabo Swinney on the path to the permanent job.

Spiller broke through the Eagles and cruised to a punt return TD, a first for the Clemson senior. It was the fifth way Spiller has accounted for a score with the Tigers after collecting touchdowns via rush, catch, kickoff return and, last year against Virginia, throwing on a halfback pass.

Spiller has 15 touchdowns of 50 or more yards in his career.

The Tigers’ defense took over from there, holding the Eagles to just one first down – and that came by penalty – in the first 43 minutes.

After crisp wins against Northeastern (54-0) and Kent State (34-7) its first two weeks, the Eagles could get little through Clemson’s defense.

Montel Harris, the ACC’s third-leading rusher at more than 90 yards a game coming in, managed 4 yards on seven first-half carries.

Boston College juggled starting quarterbacks Justin Tuggle and David Shinskie without much effect. When the Eagles jogged off the field at halftime, they had minus 2 yards of offense.

Without comeback king Matt Ryan to lead them, the Eagles had little hope of a rally.

Ryan stung the Tigers on BC’s past two visits to Death Valley. He led the Eagles to a 16-13 OT victory in 2005 for the school’s first league win since joining the Atlantic Coast Conference.

Two years ago, Ryan threw a 43-yard TD pass to Rich Gunnell late in the game for a 20-17 win that denied Clemson a berth in the ACC title game.

About the only break the Eagles got this trip was when officials halted the game in the third because of lightning near Memorial Stadium.

Boston College got its only points once the game resumed, a 13-yard pass from Tuggle to Justin Jarvis. The Eagles were offsides on the following onsides kick try.

The teams returned to a few thousand poncho-clad fans out of the 77,000 who showed up at lunchtime to watch.

That didn’t bother Jackson, who had field goals 42 and 35 yards to match Jad Dean’s record six field goals set against Texas A&M in 2005.