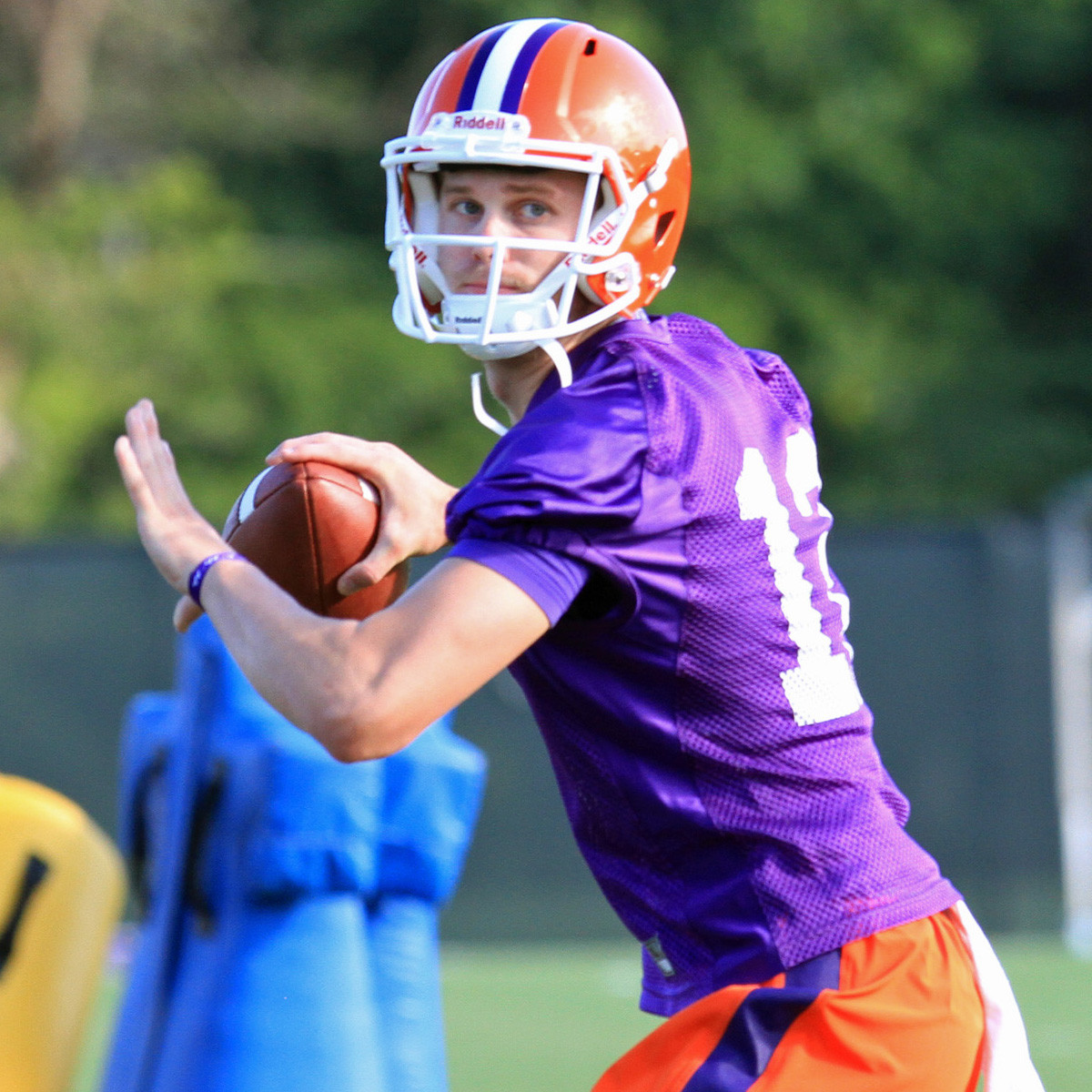 Dabo Swinney’s Clemson football program held its sixth and final practice before spring break on Wednesday, beginning on the outdoor practice fields and finishing indoors, as rain began to fall on an otherwise spring-like day. And, while 177 days from opening the 2015 season, Swinney has been pleased with the way his club is starting to take shape.

“This is a fun team to come out and practice with every day,” said Swinney. “One of the things – and I thought I saw a little bit of it today – if somebody’s not quite bringing that sense of urgency and purpose to practice, they get exposed pretty quick. It’s very competitive. You can’t really hide out there, and I love that.”

With sophomore quarterback Deshaun Watson sidelined this spring while recovering from a knee injury, it’s been veteran Nick Schuessler that has stood out among the QB corps early on.

“I can’t say enough good things about Nick Schuessler,” said Swinney. “This was one of those practices you wish everyone could see. It was pretty impressive. He has had six outstanding days of football practice. It’s great to see the light come on for guys. He has done an outstanding job of leading, made big-time throws, and is playing with a sense of urgency and confidence I have not seen from him. As a result, he’s playing faster and more decisive and accurate. It has been great to see him blossom.”

“Right now, Nick is way out in front… It’s his fourth year in the system. I was curious to see how he was going to come to work this spring. He has really asserted himself as ‘I’m the leader – Let’s go.’”

Schuessler, who completed seven of his eight passes for 47 yards in five appearances in 2014, has parlayed his experience and maturity into a leadership position on the field.

“He was a guy that has always done everything we’ve asked him to do, and always been a committed guy, but I think he was content being backup,” said Swinney. “(He was) just doing what we were asking him to do, as opposed to really having that fire and bringing the desire to be ‘the’ guy, and that’s what I’ve seen out there.”

“He has really asserted himself, and it’s been fun to watch. He hasn’t really had a bad day, and today was his best day.”

The team will meet on Thursday before breaking on Friday and returning the week of Mar. 23. And, while Swinney acknowledges the advantages for the squad to recharge its batteries after six intense practices, the program expectation of preparation remain intact.

“When we do get back, we can’t start over. We’ve had six days of installation that we’ve got to retain, and keep moving forward. We dont have time to start over, so that’s on them. It’s those guys taking pride in their performance and preparedness when they get back – going through their notes, going through their film on the iPad – everything’s available to them. There’s no excuse to not be prepared for what we’ve done.”

“That’s the challenge to those guys. Plus, they need to unplug and enjoy a little time off, which they’ll do. But, we’ve got a lot of work to do when we get back over the next three weeks.”

The Tigers will host the annual spring game on April 11 at 2:30 p.m. in Memorial Stadium.