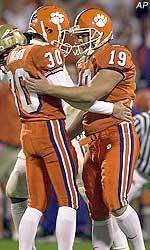 Charlie Whitehurst threw for one touchdown and ran for another and Clemson likely ended Florida State’s national title aspirations with its first victory ever over a top three team, 26-10 Saturday night.

The Tigers (6-4, 4-3 ACC) snapped an 11-game losing streak to the third-ranked Seminoles and gave Tommy Bowden his first win in five tries over his father, Bobby. Fans tore down both goalposts after Clemson’s biggest win in years.

Aaron Hunt added four field goals and the Tigers held the Seminoles (8-2, 6-1) to their fewest points of the season and just 11 yards rushing.

This Bowden Bowl wasn’t about family reunions or good-natured stories, but about the younger Bowden’s job security. The Tigers lost to Wake Forest 45-17 last week, and just about everyone expected Bobby – on his 74th birthday, no less – to show little mercy as his team tried to wrap up the league crown and move closer to a championship game.

But the Tigers played like they didn’t want to lose their coach. And the Seminoles never showed the poise and power they usually display.

Chris Rix missed his target on several throws and was intercepted by Tye Hill in the first quarter to end Florida State’s only first-half drive inside Clemson territory.

Down 16-0 in the third quarter at Clemson’s 30, Rix threw three straight passes nowhere near his receivers and the Seminoles settled for Xavier Beitia’s 46-yard field goal. Rix ended 16-for-31 for 194 yards and two interceptions.

Whitehurst continually made the game’s biggest plays. A 17-yard pass to Kevin Youngblood led to Hunt’s second field goal from 35 yards out and a 6-0 Clemson lead.

With 2:50 to go in the half, Whitehurst led a 65-yard touchdown drive – 51 on a pass to Youngblood. Whitehurst finished it off himself with a 1-yard scoring run with 15 seconds left that made it 13-0.

Whitehurst, the son of former Green Bay quarterback David Whitehurst, lofted a pass to a wide-open Derrick Hamilton for a 58-yard touchdown that gave Clemson a 23-3 lead late in the third quarter.

The Seminoles scored their lone touchdown, a 71-yard reception from backup Fabian Walker to Chauncy Stovall, with 2:14 left – far too late to make a difference.

Many of the same fans chanting “Fire Bowden” last week earlier at Wake Forest stood and cheered as Tommy cross through the swarm of people rushing the field to talk with his father.

A pass interference call on cornerback Rufus Brown kept one Clemson field goal drive going. Two Clemson series later, Brown was about to be flagged for another interference call when defensive tackle Darnell Dockett inexplicably ran into Youngblood long after the play ended. Dockett, the team leader with 14 tackles for losses, was ejected.

Florida State had already clinched a tie for its 11th league title in 12 seasons. It can wrap up the conference’s spot in the Bowl Championship Series next week against North Carolina State.

Clemson had not beaten Florida State since 1989 when Danny Ford was in his final season with the Tigers.