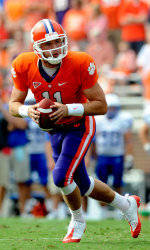 CLEMSON, S.C. – Kyle Parker threw for 114 yards and two touchdowns in just four possessions to lead Clemson to a 58-21 win over Presbyterian on Saturday.

After five offensive plays, the Tigers (2-0) led 14-0 against undersized Presbyterian.

By the second quarter, Daniel Barnes, a running back who didn’t play in last week’s 35-10 romp over North Texas was shouldering the load on a touchdown drive that ended with him scoring on an 11-yard shovel pass.

Clemson is now 24-0 against Football Championship Subdivision opponents, all the wins by 10 points or more. Presbyterian (0-2) is on a 16-game losing streak.

Now, the schedule gets tougher for the Tigers, who travel to No. 21 Auburn next weekend.

The starters didn’t play long for the Clemson, which played 57 players by the end of the first quarter.

Parker was on the sidelines by the end of the first quarter, although he did start the second half. But coaches pulled him out for good after he threw three incompletions and took a hard hit. The Tigers top runners, Jamie Harper and Andre Ellington, had just six carries between them.

Backup quarterback Tajh Boyd went 4-for-9 for 87 yards and two touchdowns, including a rushing score. Boyd may have had the hit of the game, his helmet flying nearly 20 yards as he took down Matthew Roper after throwing his one interception.

Barnes, a senior who hasn’t earned a letter, ran for 79 yards on 11 carries, while second stringer Roderick McDowell led the Tigers with 85 yards.

Ten Clemson players spread out the team’s 11 completions. The final pass was a 1-yard TD toss from senior quarterback Kasey Nobles. It was the first pass and completion for both players in their careers.

The highlights for the Blue Hose didn’t happen until the game was out of hand. Brandon Miley found Michael Ruff wide open for a 4-yard touchdown pass late in the third quarter, causing the couple of hundred blue-clad fans to go wild and cutting Clemson’s lead to 52-7. Ruff also caught a 20-yard TD pass in the fourth quarter from backup quarterback Myron Gary.

The teams used to be regular opponents in the first half of the 20th century, but Saturday was the first time they had met in 53 years. The series was lopsided back then too. Clemson won 14 in a row, culminating with a 66-0 win in 1957.