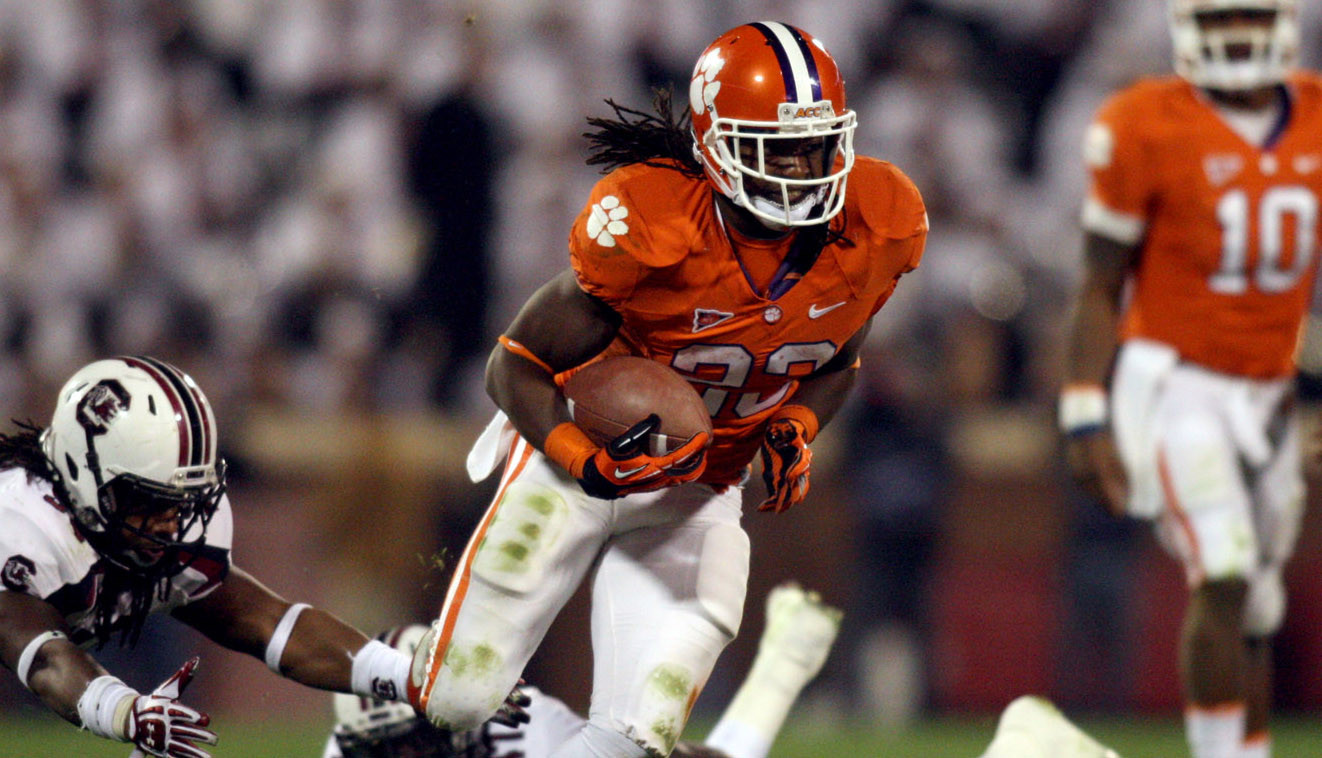 CLEMSON, SC – For almost the first time all season, someone figured out how to keep Clemson’s offense out of the end zone: keep it on the sideline instead.

The Tigers scored just three points after the first quarter and ran only 19 plays after halftime as they saw their 13-game home win streak come to an end at the hands of rival South Carolina, 27-17, on Saturday at Memorial Stadium.

“We got off to a good start scoring two touchdowns in the first quarter, but they just started to control the ball after that,” Clemson head coach Dabo Swinney said. “Give them credit, they did a great job. Their ability to put pressure on (quarterback Tajh Boyd) was key.”

That pressure was led by sophomore defensive end Jadeveon Clowney, who finished with seven tackles and 4.5 sacks on the night. Clowney’s sack total was both the most sacks and most tackles for loss by an opposing player ever at Memorial Stadium.

Clemson finished the night with a season-low 328 yards of total offense, while Boyd completed just 11 of 24 passes for 183 yards and was intercepted twice.

“Credit to those guys, those guys played outstanding on the other side of the ball,” Boyd said. “But we just didn’t do what we needed to do on the offensive side.”

After the two teams traded punts to start the game, Clemson opened the scoring by methodically marching 85 yards and finding the end zone on a three-yard option by Boyd on a third-and-goal play.

The 16-play drive matched the Tigers’ longest of the season, and they were four-of-four on third-down conversions on the march – three of those first downs coming via Boyd runs.

The Gamecocks responded with their own touchdown on the ensuing possession, as Dylan Thompson hit Bruce Ellington for a 13-yard score to cap a seven-play, 63-yard drive and tie the game 7-7 with 1:46 to go in the first quarter.

The Tigers needed just two plays and 24 seconds to respond. After a touchback, Rod McDowell went 32 yards down the sideline on a toss sweep to open the drive. On the next play, Boyd went over the top down the same sideline to DeAndre Hopkins, who beat a pair of Gamecock defenders to the ball for a 43-yard touchdown and a 14-7 lead. The score marked the ninth consecutive game with a touchdown grab for Hopkins, which matched an ACC record set by Virginia’s Herman Moore in 1990.

South Carolina cut into its deficit with a 27-yard field goal by Adam Yates with 2:40 to go in the first half that made the score 14-10.

The Gamecocks took their first lead of the night on the first possession after the half, as Thompson found Ace Sanders for a 34-yard touchdown on a third-and-16 play. The South Carolina drive covered 85 yards in 10 plays and put it ahead 17-14 with 11:48 to go in the third quarter.

On the night, Thompson threw for 310 yards and three scores on 23-of-41 passing, while also rushing for 38 yards.

“We couldn’t disrupt him,” Swinney said. “He threw the ball incredibly well. He was the difference in the game.”

Yates extended the Gamecocks’ lead to 20-14 with a 43-yard field goal with 6:56 left in the third quarter. The kick came after an eight-play drive moved the ball 42 yards.

Clemson got those three points right back, however, as Chandler Catanzaro hit a 37-yard field goal to pull the Tigers back to 20-17. Jaron Brown‘s leaping, 38-yard grab over a Gamecock defender on the opening play of the drive was the key play in Clemson moving the ball 56 yards on six plays.

Xavier Brewer made sure the score stayed that way on the next drive. After two third-down pass interference penalties extended South Carolina’s possession, Brewer came up with a sack to force another third down and then picked off a Thompson pass in the back of the end zone to squelch a 15-play, 50-yard march and give the Tigers the ball back with 13:23 to go.

“After that interception in the end zone, we felt like we could reclaim the lead, but they made some big plays to keep us off balance and we just couldn’t turn the table,” Swinney said.

The Gamecocks came up with an interception on the ensuing possession, and their offense then marched 65 yards on 13 plays and found the end zone with a six-yard pass from Thompson to a wide-open Bruce Ellington to make the score 27-17 with just 4:17 to go and provide the final margin.

“Nineteen plays in the second half, it just makes it that much more important to take advantage of the opportunities you do have,” Boyd said. “It was a learning lesson here and a life lesson as well, and we’ve just got to come back and get ready for a bowl game, whichever one we go to.”