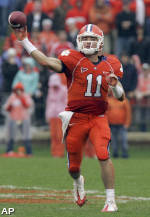 The Tigers (5-3) made headlines a week ago and star C.J. Spiller had a record 310 all-purpose yards to run his way into the Heisman Trophy race in a 40-37 overtime win at then-No. 8 Miami.

And even though Spiller played little more than a quarter, Clemson easily put away the Chanticleers (3-5) to move to 23-0 against Football Championship Subdivision teams.

Ford, the NCAA 60-meter indoor track champion, pretty much put this one out of reach by himself. He hauled in a 36-yard pass in the end zone for Clemson’s first score, then followed with a nifty toss of his own to a wide-open Xavier Dye on the Tigers next drive.

Clemson was in line for its first shutout in 17 games, until Coastal’s Justin Durham hit a 31-yard field goal with 4:02 left.

Ford, who caught the game-winning TD at Miami last week, joined Spiller as the only Tigers to score five different ways: By pass, reception and rush, then on kickoff and punt returns.

Coastal Carolina coach David Bennett understood the challenge his team faced on its first-ever trip to Death Valley. He said it was like “comparing oranges to grapes. And we’re the grapes.”

After a promising start–Coastal’s Marcus Lott picked off Parker to end Clemson’s opening drive–the Chants certainly got stomped by the Atlantic Coast Conference’s No. 2 defense. They managed only 103 yards the first three quarters and did not cross midfield until less than 9 minutes remained in the game.

Spiller said earlier in the week he’d aggravated a season-long bout with turf toe in his 310 all-purpose yard effort at Miami. Clemson lightened his load this time.

He rushed just five times for 27 yards, notching a 6-yard TD run before hitting the sidelines for good.

Most Tiger starters sat out the second half as Clemson coach Dabo Swinney peaked ahead to its home game with Florida State next Saturday that should go a long way in figuring out the muddled ACC Atlantic Division.

Still, the Tiger reserves kept the pressure on. Freshman Andre Ellington had a Spiller-esque, 55-yard touchdown run where he broke two tackles and cut hard to the middle of the field on the way to the end zone.

Parker’s backup, Willy Korn, had his head down during a 16-yard pickup and slammed into a cheerleader. Both were OK.

For a while, Clemson looked like it might match its most famous Halloween contest, an 82-24 win over Wake Forest here during the 1981 national championship season where they set school records for points and total offense (756).

Nothing went right for Coastal Carolina.

When Tre Henderson had broken free for a kickoff return TD, the Chants were called for blocking in the back. Bennett, the team’s coach, threw his hands up in the air at the refs in protest.

The biggest plus for Coastal? The $235,000 guarantee from Clemson Bennett says will go to a new video editing system and new headsets for coaches.