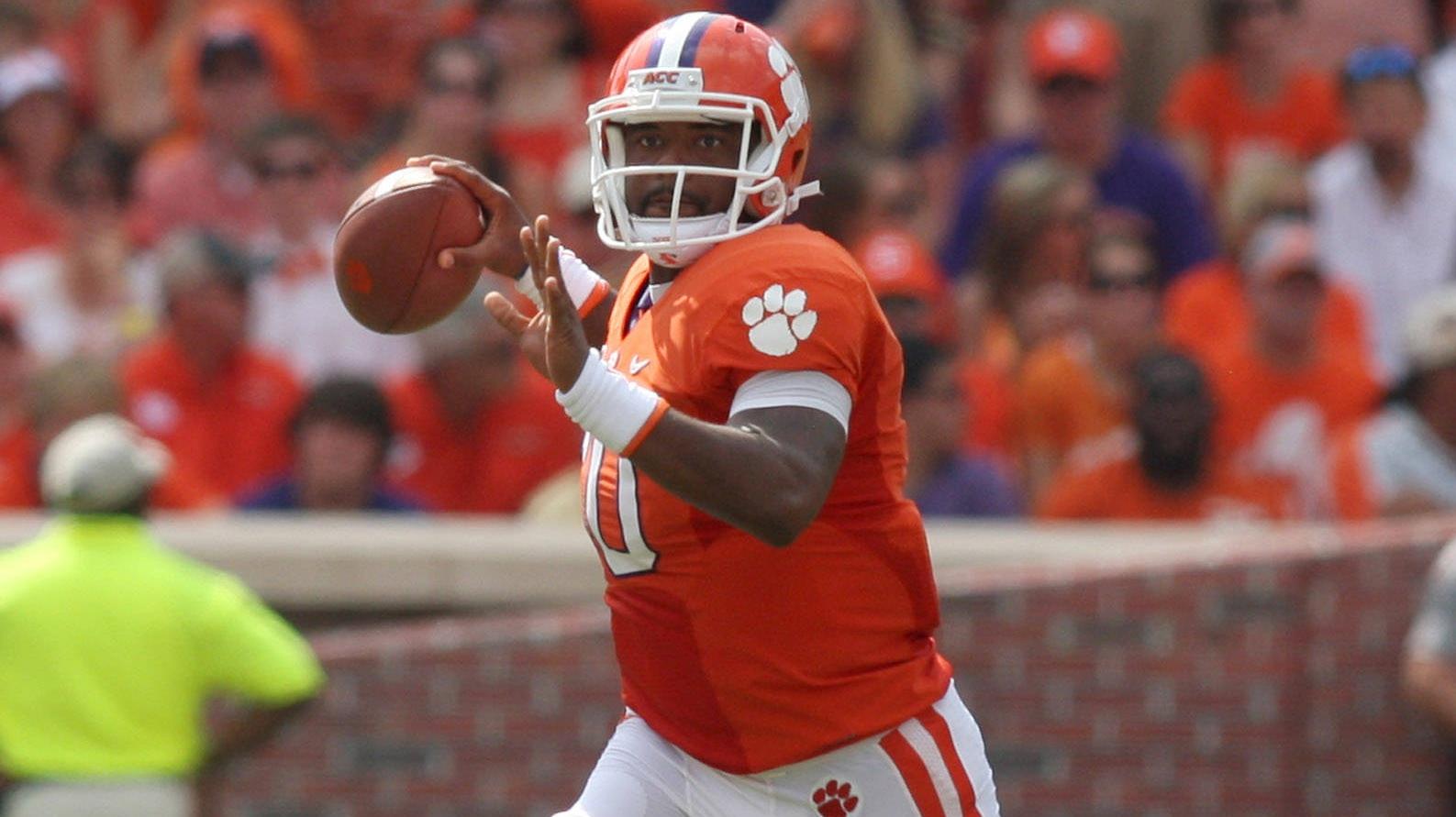 CLEMSON, SC – Tajh Boyd passed for a career-high 397 yards and broke the Clemson career record for passing touchdowns, as the Tigers scored the game’s final 17 points and rolled to a 47-31 home win over Georgia Tech on Saturday.

“This was a great, great win, and a complete game,” Tiger head coach Dabo Swinney said afterward. “I think we won every quarter, and in particular, the fourth quarter. That’s where football games are won. … All three phases had huge contributions.”

As Swinney alluded to, despite Boyd’s heroics, it was Clemson’s defense that helped swing the momentum. After the Tigers took a 38-31 lead with 10:29 to go, Georgia Tech fumbled the ensuing kickoff and fell on the ball at its own 2, where it looked to begin its drive.

Instead, Spencer Shuey diagnosed an option play on the next snap and hauled down Orwin Smith in the end zone for a safety that gave a 40-31 lead to the No. 15 Tigers (5-1, 2-1 ACC), who had trailed 31-30 just moments before.

“We had been preparing for that play all week,” Shuey said. “Once I saw the kickoff team pin them down (deep), I knew they had a pretty good chance to run the ball. I just got a good read and got a good jump on the ball and was able to make the play.”

But Boyd was intercepted on the ensuing possession, and the Jackets looked poised to make for a nervous finish after they picked up 32 yards on a pass from Tevin Washington to Smith on the first play of their drive.

Instead, the Tiger defense held and forced a 37-yard field goal attempt by Georgia Tech place-kicker David Scully. Clemson defensive tackle Josh Watson penetrated the line and got a hand on Scully’s kick, however, denying the Yellow Jackets points and setting the Tigers up for a 13-play, 80-yard drive to end the game, for all intents and purposes.

“We knew he was kicking low line drives, and we knew we could get our hands on it at the beginning of the game,” Watson said. “So, Grady (Jarrett) helped me out, we had two guys on one of the guards, and I just put my hands up and blocked it.”

But while Shuey’s and Watson’s plays helped the Tigers pull away, it was the play of Boyd and the offense that put them in position to win.

Boyd also rushed for a career-high 63 yards on the day to give him 460 yards of total offense, the second-best total in Clemson history, and found DeAndre “Nuk” Hopkins for touchdowns of 58 and 35 yards for his 50th and 51st career passing touchdowns, breaking Charlie Whitehurst’s record of 49, which he’d matched the game prior.

For his part, Boyd chalked up his statistical achievements to simply being a product of the Tigers’ offensive system, which produced 601 yards of offense on the day.

“Every record is meant to be broken,” Boyd said. “It’s an exciting opportunity … but a great guy had it in Charlie. We’re just trying to build legacies here, and it feels like we’re breaking records every week between me, Nuk, Andre (Ellington), whoever. … But the main thing we need to focus on is just continuing to win.”

The Clemson defense made the game’s first momentum-changing play on the Yellow Jackets’ first drive, as Quandon Christian and Jonathan Willard stoned Washington on a fourth-and-one play to give the Tigers the ball at the Tech 37.

Boyd then scored the game’s first points on a one-yard dive to put Clemson ahead 7-0 with 8:17 left in the first quarter.

Georgia Tech struck back in short order, however, as it needed just four plays to go 83 yards and find the end zone on a 16-yard pass from Washington to Jeff Greene.

Clemson took the lead back on its next drive with a 23-yard field goal by Chandler Catanzaro to make the score 10-7, but Georgia Tech took its first lead of the game late in the opening stanza on a 13-yard run by Smith.

The Tigers responded by going 75 yards in 13 plays and regained the advantage on a two-yard run by Roderick McDowell that made the score 17-14 with 12:21 to go in the half.

The Clemson defense got the ball right back by forcing its first three-and-out of the game, as Jarrett and Tavaris Barnes tackled Washington for a loss on third down.

Nine plays later, Catanzaro extended the Clemson lead to 20-14 on a 20-yard field goal, but Tech responded with a march of its own, as Washington capped a seven-play, 85-yard march with a one-yard plunge to put the Yellow Jackets up 21-20 with 5:04 to go in the half.

The Tigers took the lead right back, as Boyd scrambled and found Hopkins all alone near the sideline for a 58-yard touchdown and a 27-21 lead going into halftime, but Tech seized the lead back on the first possession of the second half, as Washington’s four-yard run made the score 28-27.

After the teams traded turnovers – with Jarrett recovering a fumble at the Clemson 7 to quell a potential Tech scoring drive – the Tigers moved back in front on a 21-yard kick from Catanzaro that capped a 14-play, 90-yard drive that took 5:27 off the clock. It was Clemson’s longest drive of the season in all three regards and made the score 30-28 with under a minute to go in the third quarter.

Tech moved back in front on the ensuing possession, however, as Scully’s 26-yard field goal made the score 31-30 with 13:30 to go in the game.

The Tigers responded quickly, though, and went 75 yards in eight plays and 2:26, finding the end zone on a leaping grab by Hopkins for a 35-yard touchdown from Boyd to make the score 36-31.

Clemson then went for two and pulled off a nifty gadget play, snapping to Ellington, who pitched to Hopkins, who threw to Boyd for the conversion and a 38-31 lead.

After Shuey’s play that led to the safety and Watson’s blocked kick, McDowell scored on a one-yard plunge with 50 seconds left in the game to cap a 13-play, 80-yard drive that provided the final margin at 47-31.

“That was a huge, huge win for our team,” Swinney said. “It was a momentum win. That was something we talked a lot about this week and were really trying to build some momentum going into the open date. I’m really proud of them.”