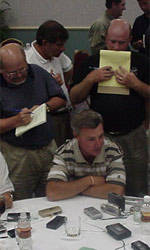 ISLE OF PALMS, S.C. (AP) – Bobby Bowden remembers narrow wins over Clemson and Georgia Tech in his first season in the Atlantic Coast Conference, and just figured that would be the norm.

Almost a decade later, the Seminoles can count their close games on one finger en route to a 70-2 league mark that has produced an air of invincibility in Tallahassee, Fla.

Bowden, 71, tried to tell all who would listen Monday at the ACC Football Kickoff that his college football dynasty could be in trouble this season with only nine returning starters and a decision on a starting quarterback still pending.

The media digested what Bowden had to say, and then still voted Florida State by an overwhelming margin to win the ACC title for the 10th straight season.

The Seminoles, who have won 10 or more games a record 14 straight seasons under Bowden, received 64 of 70 first-place votes cast for 624 points.

The other top votes went to Georgia Tech (5) and Clemson (1).

“I think they played 28 guys a game on defense and he lost eight,” Clemson coach Tommy Bowden said of Florida State. “So, that’s 20 guys coming back that have played like a starter. I know you guys aren’t going to fall for what my dad is saying. Those guys are All-American players, too.

The elder Bowden agreed with his son there, saying QBs Anquan Boldin and freshmen Chris Rix could develop into stars in time.

“There is good news about this thing,” Bobby Bowden said. “Even though we have no experience don’t think we don’t have some talent. These two kids can play some football.”

Bowden said he’ll likely wait to name a starting quarterback a week before his team’s opener Sept. 1 at Duke, but should know a few weeks later if the Seminoles have another shot at a national title.

“If we could win our first three, and that has to include Georgia Tech because that’s another level, then we’ve got a chance to have a great season,” Bowden said. “Until that one [on Sept. 15] we will not know because I think Georgia Tech is going to be one of the top teams in the country.”

The Yellow Jackets, who received 554 points, return 16 starters from a 9-3 team and have finished at least tied for second in the ACC for three straight seasons.

“I think everybody is still chasing Florida State,” Georgia Tech coach George O’Leary said. “We’re looking forward to going down there, and it will be another opportunity for our football team, to see where we’ve improved.”

O’Leary wasn’t surprised the Seminoles were picked yet again to win the conference crown.

“It says they’re doing a heck of a job coaching and recruiting down there and playing the game the way it’s supposed to be played,” O’Leary said. “I enjoy playing great competition and they obviously are.”

Tommy Bowden has won 3, 6 and 9 games in his first three seasons at Clemson. Now, he’ll see if the program can reach double digits. The Tigers received 492 points.

Meanwhile, N.C. State, the only team in the ACC to win a bowl game last season, was picked to finish fourth in Chuck Amato’s second season.

However, the former Florida State assistant is still battling depth problems and returns seven starters from a defense that allowed almost 200 yards a game on the ground in 2000.

Duke, which went 0-11 a season ago and has lost 14 straight, was picked to finish last.

Copyright 2001 Associated Press. All rights reserved. This material may not be published, broadcast, rewritten, or redistributed.