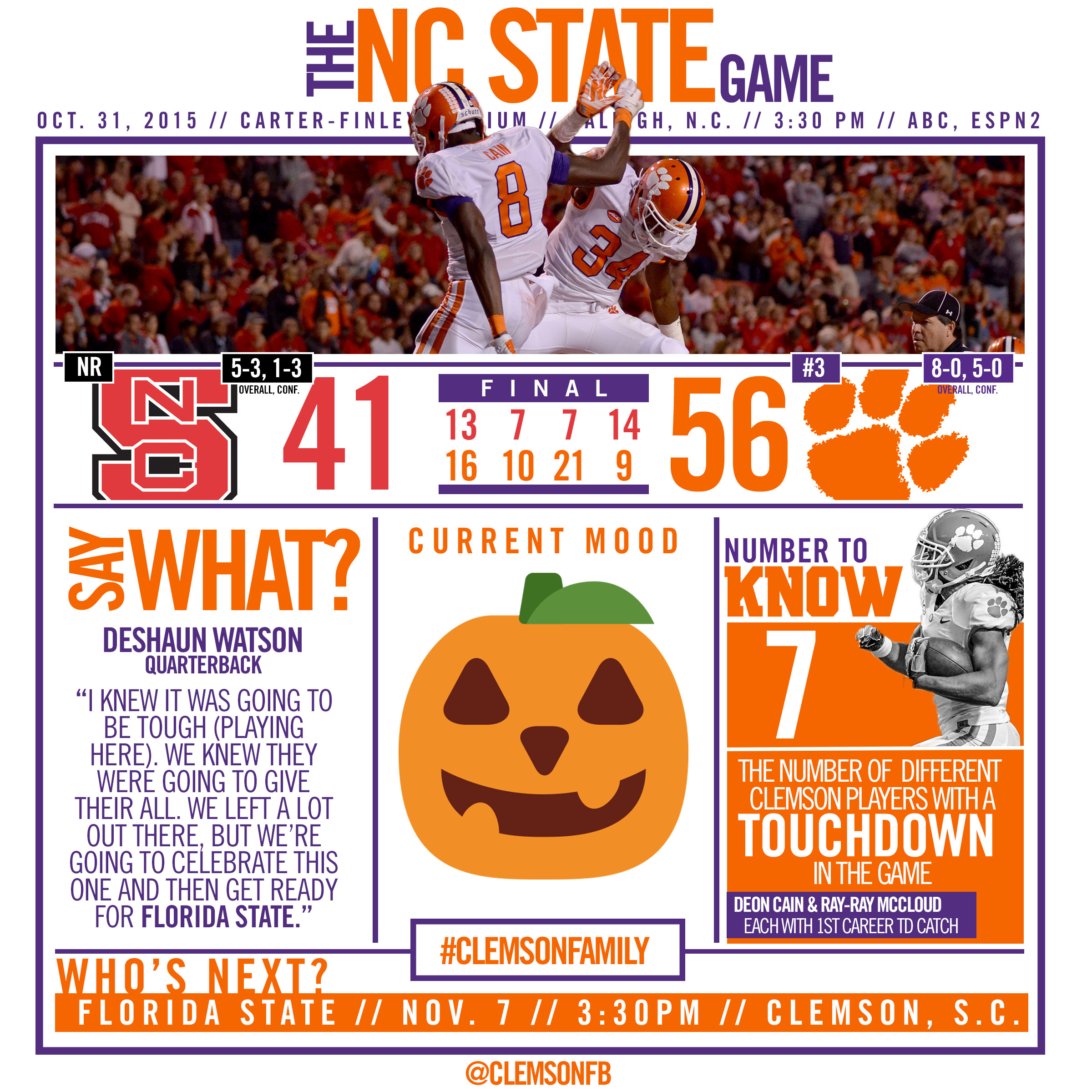 RALEIGH — The No. 3 Clemson Tigers defeated NC State 56-41 on Halloween at Carter-Finley Stadium on Saturday. It was Clemson’s 11th-consecutive win dating to last season, the program’s longest winning streak since a 13-game tear from 1980-82.

Sophomore quarterback Deshaun Watson led the Tigers to over 600 yards, as he completed 23-30 passes for 383 yards and five touchdowns. He also added a score on the ground to match his single-game high of six set last season against North Carolina. Wayne Gallman rushed for a season-high 172 yards, his fifth game over 100 yards this season.

The game got off to a bizarre back and forth start, with both teams trading two touchdowns with a blocked point-after attempt. Watson ran for a score and threw a 57-yarder to Hunter Renfrow, the latter of which tied the game at 13 just five minutes into the contest.

The Tigers gained control briefly after a pair of field goals by Greg Huegel, but NC State rallied with a touchdown late in the second quarter to nudge ahead, 20-19. But the Wolfpack failed to convert a field goal late, and with less than a minute to play in the half, the Tigers made them pay. Watson found Artavis Scott and Charone Peake open in 1-on-1 matchups on the right sideline. The completion to Peake went for 42 yards and a touchdown, giving the Tigers a 26-20 edge at halftime.

Watson’s aerial show continued in the second half, as he flung a beautiful 40-yard pass to Deon Cain for the freshman’s first career touchdown that put Clemson at 40 points on the day. He followed that up with his fourth touchdown of the day, a 35-yard screen to Zac Brooks. But NC State refused to go quietly, answering with a couple of touchdowns of its own in the fourth quarter. Greg Huegel’s third field goal of the day ended the threat from the Wolfpack and put the Tigers up 15 with just under six minutes to play.