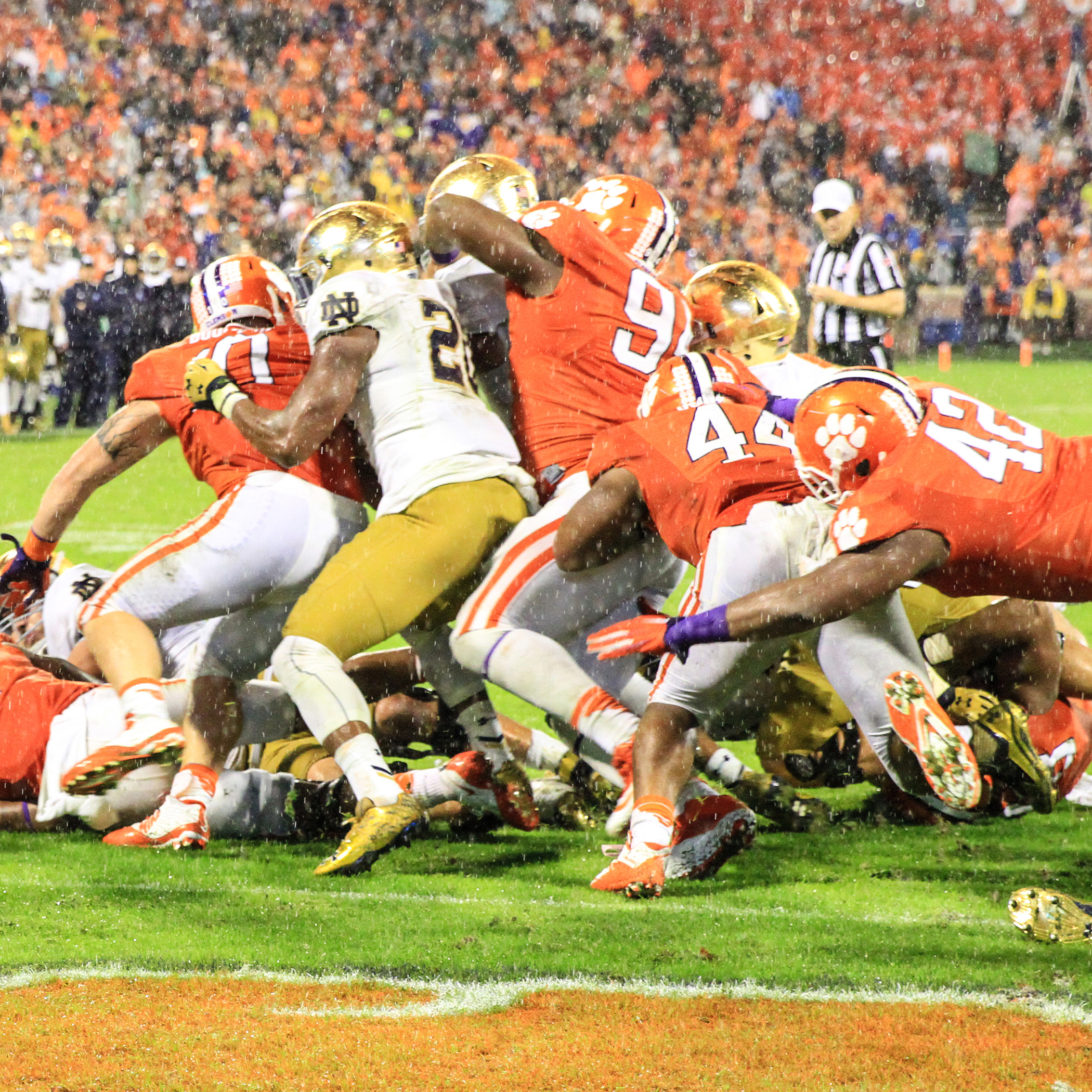 Editor’s note: This is the seventh in a series of the most memorable games in the history of Memorial Stadium, which is celebrating 75 years this season.

It had been 38 years since Notre Dame played at Clemson. In 1977, the No. 5 Fighting Irish, led by Joe Montana and future College Football Hall of Famers Ross Browner and Ken MacAfee, faced No. 15 Clemson, which featured Steve Fuller, one of six offensive starters who would play at least nine years in the NFL. In all, there were 38 future NFL players on the rosters of those two teams.

It is too early to tell, but there might have been as much NFL talent in the 2015 game between the two. Notre Dame entered the contest ranked No. 6 in the nation and Clemson was No. 11.

Hurricane Joaquin had hit the Carolinas a day or two earlier, and its remnants were on top of Clemson, S.C., by gameday on Oct. 3. ESPN College GameDay was at Clemson for the game, and the hurricane was such a story that the Weather Channel’s Jim Cantore was the guest picker from a remote site.

The weather, with wind and rain, was epic in many ways, but it only galvanized Tiger fans. There wasn’t a seat to be had, especially in the student section.

The game did not appear to be a legendary affair from a competitive standpoint, because the Tigers got off to a great start. Deshaun Watson had not run much at this point in the year, as he was coming off a torn ACL in 2014. But his 38-yard run on the game’s first play got the Tigers going. Later on the drive, he hit Jordan Leggett on a six-yard scoring pass to give Clemson a 7-0 lead.

Later in the first quarter, Watson hit Artavis Scott on a 13-yard touchdown to give the Tigers a 14-0 lead. Justin Yoon booted a 46-yard field goal, an incredible accomplishment in the conditions, to put Notre Dame on the scoreboard.

Ammon Lakip kicked off to begin the second half and became the first kicker in memory to force a fumble, as he jarred the ball loose from C.J. Sanders. Clemson recovered at the Notre Dame 29, and three plays later, Watson ran 21 yard for a touchdown to up Clemson’s lead to 21-3.

Notre Dame has a well-earned reputation for comebacks, and this evening showed that this Fighting Irish team would compete for a College Football Playoff spot. Trailing 21-3 entering the fourth quarter, DeShone Kizer hit running back C.J. Prosise on a 46-yard touchdown pass to start the comeback.

With 14 minutes left, head coach Brian Kelly made the decision to go for a two-point conversion, but it failed. Greg Huegel booted a 35-yard field goal on the next possession, and Clemson had what seemed to be a comfortable 24-9 lead with 10:56 left.

The Fighting Irish had one last chance with 90 seconds left. They drove down the field in quick order behind Kiser’s passing to Prosise and Torii Hunter Jr. With seven seconds remaining, Kiser hit Hunter for a one-yard scoring pass in the right corner of the endzone.

A stunned crowd saw the scoreboard show a 24-22 lead with a two-point conversion pending. Was this to be another legendary Notre Dame comeback?

Not on this night. Kiser attempted to run right for the two points, but Carlos Watkins, Kevin Dodd and Ben Boulware combined to stop him short of the goal line and Clemson had a victory that was the foundation of a resumé that took the program all the way to the national championship game at season’s end.

Notre Dame ended the game with 432 total yards, including 321 passing yards for Kiser, the only time all year an opponent threw for more yards than Watson. Clemson gained just 296 yards, but Notre Dame committed four turnovers.

“I told the team this game was BYOG, bring your own guts!” said head coach Dabo Swinney after the game.

T-shirts were in production by Monday morning.

“I am so proud of the way we played and the heart we showed tonight. This was a magical night and it is a game I will never forget.”

We all can’t wait for the 2023 season when the Fighting Irish return to Death Valley.