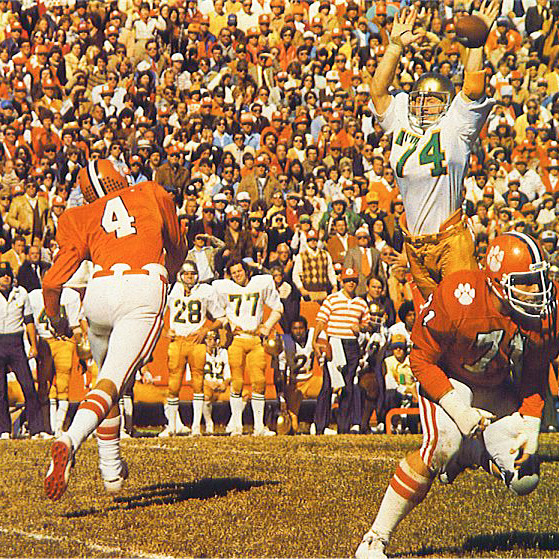 CLEMSON, S.C. – Clemson will play Notre Dame four times between the 2015 and 2023 seasons, the ACC announced Tuesday. The league announced games Notre Dame will play against all ACC opponents until 2025.

Next year’s contest will be the first appearance for the Fighting Irish at Memorial Stadium since 1977, when a pair of top-15 football teams met in Death Valley. The No. 5 Notre Dame football team, led by quarterback Joe Montana, defeated No. 15 Clemson, led by Steve Fuller, 21-17.  Both quarterbacks went on to play on Super Bowl winning teams in the NFL.

Notre Dame went on to win the 1977 National Championship. Notre Dame won seven of its last eight games that year by at least 24 points, including a 38-10 win over top-ranked Texas in the Cotton Bowl. The only close game the Fighting Irish had was the four-point decision at Clemson, a game Clemson led 17-7 entering the fourth quarter. Thirty-six players in that game went on to play in the NFL.

When Clemson travels to Notre Dame in 2020, it will be Clemson’s first appearance in South Bend since 1979. That year, Clemson won by a score of 16-10. It was just the second time in the 40 years (1940-79) that Notre Dame’s seniors lost their final home game. Billy Lott scored a touchdown late in the game on a 26-yard run to give Clemson the win after overcoming a 10-0 deficit.

Danny Ford led Clemson to that victory as head coach of the Tigers. Thirty-one-years old at the time, Ford is still the second-youngest coach and the youngest since 1934 to beat Notre Dame in Notre Dame Stadium.