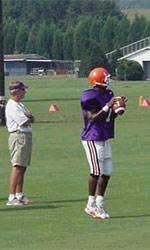 Clemson, SC – The offense had the upper hand in a Tuesday Clemson football scrimmage in Death Valley. Tommy Bowden worked his team for over two and a half hours on Tuesday, the final day of two-a-day practices. Earlier, the team worked for an hour and a half on the kicking game.

The defense did not have as many big plays at it had in Saturday’s scrimmage when the offense scored just two touchdowns all day. Bryant McNeal had a caused fumble, while Brandon Jamison and Kelvin Morris both recorded sacks.

“The offense made some big plays today,” said Bowden. “I don’t know if it was an alignment problem or good plays by the offense. The defense had been ahead of the offense, but the offense caught up some today.

“The offense improved in that they did not have as many turnovers as they did Saturday, but they did commit some penalties. We lined up offside. We certainly have to improve in that area. Both quarterbacks looked good. Charlie Whitehurst threw the ball well and Chad Jasmin ran well.”

Overall, Bowden was satisfied with what he was able to accomplish during two-a-days. “We missed some work last night due to the ran and we had a couple of players out with injuries, but overall we got a lot out of two-a-day practice. We head into this week with a lot of work to do to get ready to play a top 10 team on the road.”

The scrimmage in the stadium was played with noise resonating over the public address system. “We need to work in that environment, it will be loud at Georgia. This forced the players to work with signals. The offense did a good job, I don’t think we had any delay of game penalties.”

Derrick Hamilton and Bobby Williams both suffered sprained ankles in the scrimmage, but the injuries are not serious. Todd McClinton saw limited work, but Kevin Youngblood returned and caught a couple of passes. Nick Eason watched from the sidelines as he recovers from cardiac tests held over the weekend. Tye Hill, who had been suffering from a pulled hamstring, returned to practice and scored a touchdown on a three-yard run.

One of the visitors to practice was wide receiver Roscoe Crosby, who will sit out this season after enduring Tommy John Surgery. He begins classes at Clemson on Wednesday, along with the rest of the Clemson team.