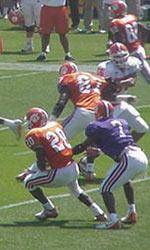 Clemson, SC – Clemson held its first day of practice in full gear on Tuesday. Tommy Bowden’s Tigers worked for nearly three hours in the morning and for two-and-a-half hours in the afternoon on the practice fields behind the Jervey Athletic Center.

“It was an important day for us,” said Bowden, who is in his fourth year as Clemson head Coach. “The game is played in pads, so the first day of practice in pads is important. For the first day, it looked like the defense had the upper hand and it was good to see that. I thought the quarterbacks threw the ball well, but overall, the defense was ahead of the offense. They did force some turnovers.”

One player who stood out on defense was cornerback Toure Francis, who has been in a battle with returning starter Kevin Johnson this fall. “A lot of players stood out, but the player who comes to mind first is Toure Francis. Toure has pulled ahead of Kevin Johnson at a cornerback position. It is a battle at that position, but for right now he has pulled ahead. He has played well overall and has adapted to Coach (John) Lovett’s system. He has been steady.

“Being an ex-walk-on myself, you like to see a walk-on get in a position to have a starting role. He has been on scholarship the last two years. He is not on (scholarship) right now, but he is the number-one priority (to get one). We have a lot of walk-ons who work hard on this team.

Bowden discussed the running back situation, where he plans to use many players this fall. “Offensively, Bernard (Rambert) is number-one at running back, but Yusef Kelly, Chad Jasmin and Tye Hill are going to see action. We have some depth there and we will play many running backs. They all want to carry the ball.”

Bowden said there were a couple of players injured, but the team overall is in good physical shape. Nathan Gillespie missed the morning practice with a knee injury. Kevin Youngblood is still not involved in the scrimmaging because of a sprained foot. Dustin Fry is still out with a dislocated kneecap. Todd McClinton (hamstring), DeJuan Polk (ankle) and Altroy Bodrick (dislocated nose) missed the afternoon practice.

The Tigers will continue two-a-day practices on Wednesday. The practices are closed to the public and the media.