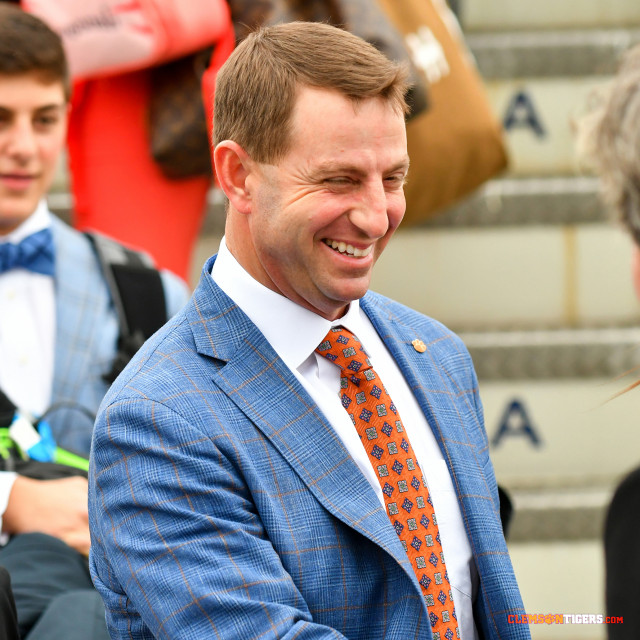 Clemson, S.C.—Clemson held its final half scrimmage and practice in pads on Monday at the Poe Indoor Practice Facility. The Tigers worked inside for the entire two-hour session due to inclement weather.

The Tigers will hold their annual Spring Game on Saturday at 2:30 p.m. at Memorial Stadium. Admission is free.

Dabo Swinney’s Tigers held a scrimmage for the second half of the practice on Monday. The defense had one of its best days as the offense scored just one touchdown. “Today was a good practice, one of the best of the spring,” said Swinney, who has taken the Tigers to 40 wins over the last three years.

“I hate using those terms (first-team, second-team). We are all Clemson football players. I saw a lot of good plays today.”

“I really hope there is a great crowd, because the bigger the crowd the more we can simulate what the atmosphere will be like in the fall. We don’t have any exhibition games like the NFL, so this is the best we can do to prepare.”

Once again Swinney and his coaches will divide the team evenly, which should lead to a competitive game. Each team will have two quarterbacks. Swinney and the coaches will pick the teams on Tuesday and Wednesday.

One of the highlights of Monday’s practice was the performance of freshman tight end Braden Galloway of Seneca, SC and Seneca High School. Galloway had been recovering from an injury suffered last fall, but Monday was his first full practice. Swinney expects him to play Saturday. “He is still learning. We might have to call out to him what to do,” said Swinney with a smile.

Running back Adam Choice and safety Tanner Muse missed the practice on Monday due to injury, but Swinney hopes both will be able to play Saturday. All-American defensive tackle Dexter Lawrence will be held out of the spring game, as will defensive end Richard Yeargin and safety Nolan Turner who are recovering from injury.