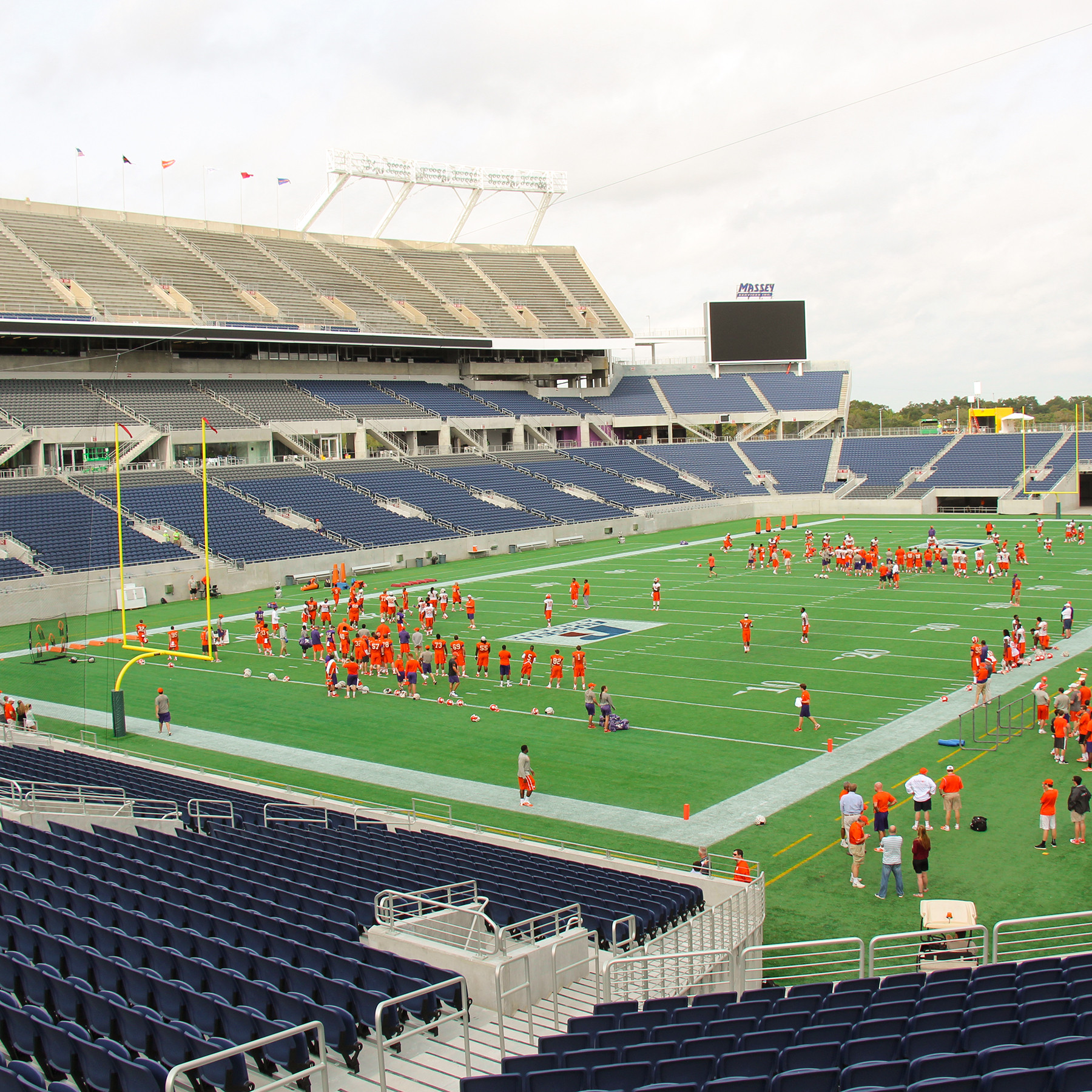 ORLANDO, FLA. – It was Wednesday, December 24, Christmas Eve in Orlando, but it might as well have been a regular Monday late afternoon in Clemson, S.C. for the Tiger football team as it held its first practice in the host city for its Russell Athletic Bowl contest against No. 24 Oklahoma on Monday at 5:30 p.m. Despite the holiday season atmosphere, the Tigers were all business as they prepare to face the winningest team in college football since World War II.

The major difference was the site of the practice, as the Tigers worked in Orlando Citrus Bowl Stadium, the site of Monday’s game. The facility has undergone an extensive renovation and is in terrific condition.

“We had a good practice, a good start to our work week,” said Head Coach Dabo Swinney to his team after practice. “We have to continue to work hard this week. This was just like a Monday and I want everyone to be in that frame of mind. Tomorrow, it will be like a Tuesday practice (even though it will be Christmas Day).”

The week has gotten off to a good start for the Tigers. Everyone is eligible from an academic standpoint and only one player was late for last night’s team meeting. That tardiness was excused because of a cancelled airline flight.

Swinney believes his team is in a good frame of mind, as there is much to play for against the Sooners.

“We have a chance for a 10-win season for the fourth straight year. Only Alabama, Oregon and Northern Illinois have done that, and we are the only team in the nation that can join them with a bowl win. That is the type of consistency we want to be known for. We also have a chance for a third straight bowl win, something that has not been done at Clemson since the 1986-90 era.”

Swinney also said it would mean something to beat a program as strong as Oklahoma and add them to the list of recent bowl wins over Louisiana State and Ohio State. A win over the Sooners would give Clemson bowl wins over three programs that have won the national title since 2000.

“Oklahoma is one of the great programs in America,” stated Swinney. They were ranked No. 1 by a lot of people coming into this season. Their season has shown how three or four plays can make a difference.”

Much of the talk after the practice was about the tight end position, the area that has been struck by injury more than any other this year. Jordan Leggett, Clemson’s top receiver at the position with 14 receptions for 161 yards and a touchdown, suffered a knee injury in practice last week and is still out of practice. His status for the game Monday is unknown.

“It is only Monday in terms of game week preparation,” said Swinney. “We will see how he is later in the week. It has been a position that has been struck by injury all year dating to the season opener at Georgia when Sam Cooper broke a leg in warmups. It really has been incredible.”

Cooper has returned to play eight games, including five as a starter, and is regarded as Clemson’s top blocking tight end and a team leader. The graduate was named one of Clemson’s four permanent co-captains for 2014 at the conclusion of the regular season. The Tigers have converted-defensive lineman Roderick Byers, who has been working after practice on his pass-catching skills.

“We will be very strong at this position down the road,” said Swinney. “But the injury list has been something out of the ordinary.“

Stanton Seckinger, who has six career touchdowns and all have come in Clemson wins, is out with a knee injury that required surgery. Jay Jay McCullough was suspended for the game. D.J. Greenlee suffered a torn ACL earlier in the season.

On Wednesday afternoon, the team headed to Disney World. The Tigers have a Christmas celebration at brunch Thursday morning, then have a two-hour practice in the afternoon.

• Every player made the 7:45 p.m. meeting Tuesday at the hotel with the exception of Houston, Texas native Kellen Jones, who had a flight cancelled from his home state. However, he still made it to the hotel Tuesday night.

• Orlando Citrus Bowl Stadium features field turf, which should put a smile on the faces of Tiger coaches and players. Clemson has won nine straight games on an artificial surface dating to the 2010 season. The current senior class is 8-0 on field turf.

• Clemson is looking for its third straight bowl victory, something the program has not done since the 1986-90 era, when the program won five in a row. Two of those five wins came in the Citrus Bowl, the site of Monday’s game. Clemson beat Penn State in the 1988 Citrus Bowl and Oklahoma in the 1989 Citrus Bowl.

• With 41 wins, Clemson is one of the top-15 winningest programs in the nation over the last four years. With a win, Clemson would have beaten seven of the other top-14 schools on the list. Clemson’s seniors have already beaten Florida State, Georgia, Louisiana State, Louisville, Ohio State and South Carolina since 2011.