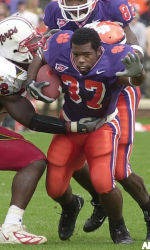 Until the final moments, the Tigers (3-4, 2-3 Atlantic Coast Conference) had little success against Maryland’s defense, which put up five sacks and held Clemson to a field goal over the first 59 minutes.

But quarterback Charlie Whitehurst, starting at his 41, suddenly found his rhythm when it counted most. He hit passes of 9 yards to Kelvin Grant, 14 yards to Kelvin Grant and 18 yards to Airese Currie to get to Maryland’s 7 with 1:29 left. A pass interference call on cornerback Gerrick McPherson moved the ball to the 2 and Merriweather finished the comeback victory with his straight ahead run for a touchdown.

Maryland (3-4, 1-3) had one last possession, but sophomore Joel Statham was picked off by Justin Miller and Clemson ran out the clock on its first win over the Terps since 2000.

For the longest time, the Terps’ defense controlled the game and covered the continued offensive problems for Friedgen’s team. The fourth-year coach and offensive whiz had watched his team manage just 172 yards combined in home losses to Georgia Tech and North Carolina State.

The Terps got 194 against the Tigers, but could not get things going on offense. Maryland punted nine times and twice tried – and failed – on fourth down.

Until Clemson’s last drive, it looked like Josh Allen’s 1-yard touchdown in the first quarter, which followed a blocked punt from David Holloway, would be enough.

Maryland held Clemson to 36 yards rushing and forced the Tigers to go three-and-out on its first four possessions of the second half.

Maryland managed 81 yards of offense in losing to Georgia Tech two weeks ago and 91 in last Saturday’s loss to North Carolina State. The Terps surpassed both those totals in the first half against Clemson with 112 yards. Not that it produced a lot of points.

The team’s best series, when the Terps drove 50 yards to Clemson’s 21, ended when senior kicker Nick Novak, second in the ACC with 10 field goals, pushed a 38-yard try wide left.

Statham, who was pulled in favor of freshman Jordan Steffy the past two losses, stayed in all the way this time. He was 14 of 31 for 111 yards and two interceptions.

Merriweather had 60 yards on 17 carries for the Tigers.