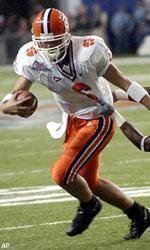 Lewis bounced back with an impressive performance after injuries forced him to miss last week’s game against Wyoming, McNeal skillfully directed the offense, and the Aggies’ defense overwhelmed Clemson’s no-huddle offense.

Thought to be a contender for the ACC title this season, Clemson (1-2) took its second straight defeat to an unranked team. The Tigers were ranked No. 20 before last week’s loss to Georgia Tech.

The Aggies (2-1) may finally be able to reclaim the “Wrecking Crew” moniker after hounding Clemson quarterback Charlie Whitehurst into one of his worst performances. A&M coach Dennis Franchione had stripped his defense of the longtime nickname following a string of embarrassing performances last season.

Whitehurst, the ACC’s leading passer, finished 20-of-36 for 192 yards with three interceptions and a touchdown. He was sacked five times and chased around all night by Aggies.

Clemson was held to 250 yards, its lowest total since getting 199 in a loss to Georgia in the 2003 season opener.

A&M’s offense was almost as impressive as its offense, rolling up more than 500 yards and committing no turnovers for a second straight week.

Lewis scored both touchdowns within a five-minute span of the second quarter. The first was a 1-yard plunge for a 7-0 lead and the next came on a 29-yard sprint down the middle of the field to extend the lead to 14 points.

Clemson got on the board late in the second quarter when Whitehurst found Ben Hall for a 15-yard touchdown pass to cap a four-play, 59-yard drive. Stephen Furr missed the extra point, making it 14-6.

On their first drive of the second half, the Aggies marched 99 yards in nine plays and scored on Jason Carter’s 3-yard run to all but seal the victory.

The next month won’t get any easier for the Tigers. Clemson has ACC road trips to No. 8 Florida State and No. 12 Virginia over the next three weeks.

A&M has a bye week, then opens its Big 12 schedule against defending league champs Kansas State on Oct. 2.