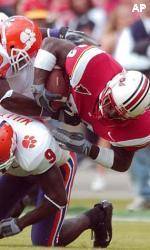 Steve Suter, Rich Parson and Derrick Fenner had touchdown receptions to help the Terrapins (4-2, 1-1 Atlantic Coast Conference) beat the Tigers for the third straight time since Ralph Friedgen took over as head coach.

Derrick Hamilton caught seven passes for a career-high 175 yards and a touchdown for Clemson (3-2, 1-1 ACC), which had a three-game winning streak snapped. The Tigers had only 10 yards rushing on 29 attempts.

The game attracted 51,455 to Byrd Stadium, the third straight sellout and the first time the Terrapins have drawn in more than 50,000 fans for three consecutive home games.

The Terrapins limited Clemson to minus-14 yards on the ground in the first half and took a 14-7 lead on a pair of scoring passes by McBrien, who finished 14-for-27 for 204 yards.

McBrien capped off a 12-play, 68-yard drive by connecting with Suter on a crossing pattern good for a 25-yard touchdown with 5:41 left in the first quarter.

Parson hauled in a 10-yard scoring reception from McBrien in the right side of the end zone, extending the lead to 14-0 on the third play of the second quarter.

Clemson’s passing game was largely ineffective in the first half, save for the 70-yard touchdown pass from Charlie Whitehurst to Hamilton that cut Maryland’s lead in half with 2:33 left in the second period.

Fenner scored on a 69-yard pass from McBrien late in the third quarter for a 21-7 lead. On third-and-10, Fenner outleaped Tye Hill in front of the Clemson bench to corral McBrien’s floater, then cut back across the field and outraced Hill to the end zone.