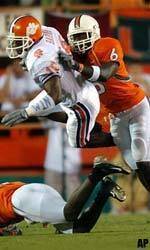 MIAMI (AP) – Reggie Merriweather ran for a career-high 114 yards and three touchdowns, including a 2-yard score in overtime Saturday night to cap Clemson’s 24-17 comeback victory over No. 11 Miami.

Clemson needed five plays to score in the extra session, with the Tigers benefiting from a pass-interference penalty against cornerback Kelly Jennings. That moved Clemson to the 10, and Merriweather scored three plays later to cap the Tigers’ rally from a 17-3 halftime deficit.

On its overtime possession, Miami moved to the Clemson 5, but three straight incompletions by Brock Berlin sealed the Hurricanes’ second straight loss. Berlin’s final attempt was intended for Lance Leggett in the corner of the end zone, but Clemson’s Tye Hill had him well-covered and the ball bounced away.

The loss knocked the Hurricanes (6-2, 3-2) out of first place in the Atlantic Coast Conference, leaving them a game behind Virginia and Virginia Tech in the race for the league title and automatic Bowl Championship Series berth. Miami visits Virginia next weekend, and hosts Virginia Tech on Dec. 4 in the regular-season finale.

Clemson (5-4, 4-3) has won four straight games for the first time in four seasons.

Frank Gore had 105 yards and two touchdowns for Miami, which also lost on the game’s final play a week ago at North Carolina. Clemson outgained Miami 215-104 after halftime, sparking the comeback.

The win marked the first for the Bowden clan against Miami coach Larry Coker; Clemson coach Tommy Bowden is the son of Florida State coach Bobby Bowden, who is 0-5 against Coker.