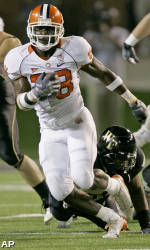 Skinner was 22-of-34 for 186 yards and led the decisive 15-play, 78-yard drive in the fourth quarter for the Demon Deacons (4-1, 2-0 Atlantic Coast Conference). Wake Forest outgained Clemson 342-198 to snap a two-game losing streak in the series and remain the only Atlantic Division team with a perfect conference record .

Shane Popham–starting in place of injured kicker Sam Swank–had field goals of 22 and 32 yards for Wake Forest, and a dominant defense held the Tigers’ vaunted ground game to 21 yards rushing on 23 carries.

Alphonso Smith’s school-record-tying 17th career interception gave Wake Forest the ball inside the Clemson 20 and set up Popham’s second field goal, which pulled Wake Forest to 7-6 with just under 13 minutes to play.

Then, after forcing a punt, it was Skinner’s turn to rally the Demon Deacons.

Taking over with about 10 1/2 minutes left, he systematically marched Wake Forest downfield by completing seven of nine passes for 69 yards and converting three third downs–including a 28-yard pass to Boldin on third-and-24.

He then found Boldin in the right flat, and the receiver cut back through two defenders and into the end zone for his first career touchdown. Skinner’s 2-point conversion pass for Ben Wooster was batted away.

Clemson got no farther than its own 39 on its last possession, with linebacker Stanley Arnoux breaking up Harper’s fourth-and-20 pass with about 3 1/2 minutes left to seal coach Jim Grobe’s third win over the Tigers in eight tries.

Star James Davis finished with 25 yards, while backfield mate C.J. Spiller had just 10 yards on two carries before injuring his left leg in the second quarter.

With the ground game struggling, Clemson couldn’t get anything going offensively until the final moments of the third quarter, with Harper taking advantage of a pass-interference penalty on Chip Vaughn to convert his first third down and then temporarily putting Clemson ahead by finding Ford over the middle. The track star juggled the ball before pulling it in as he crossed the goal line for the Tigers’ only score.