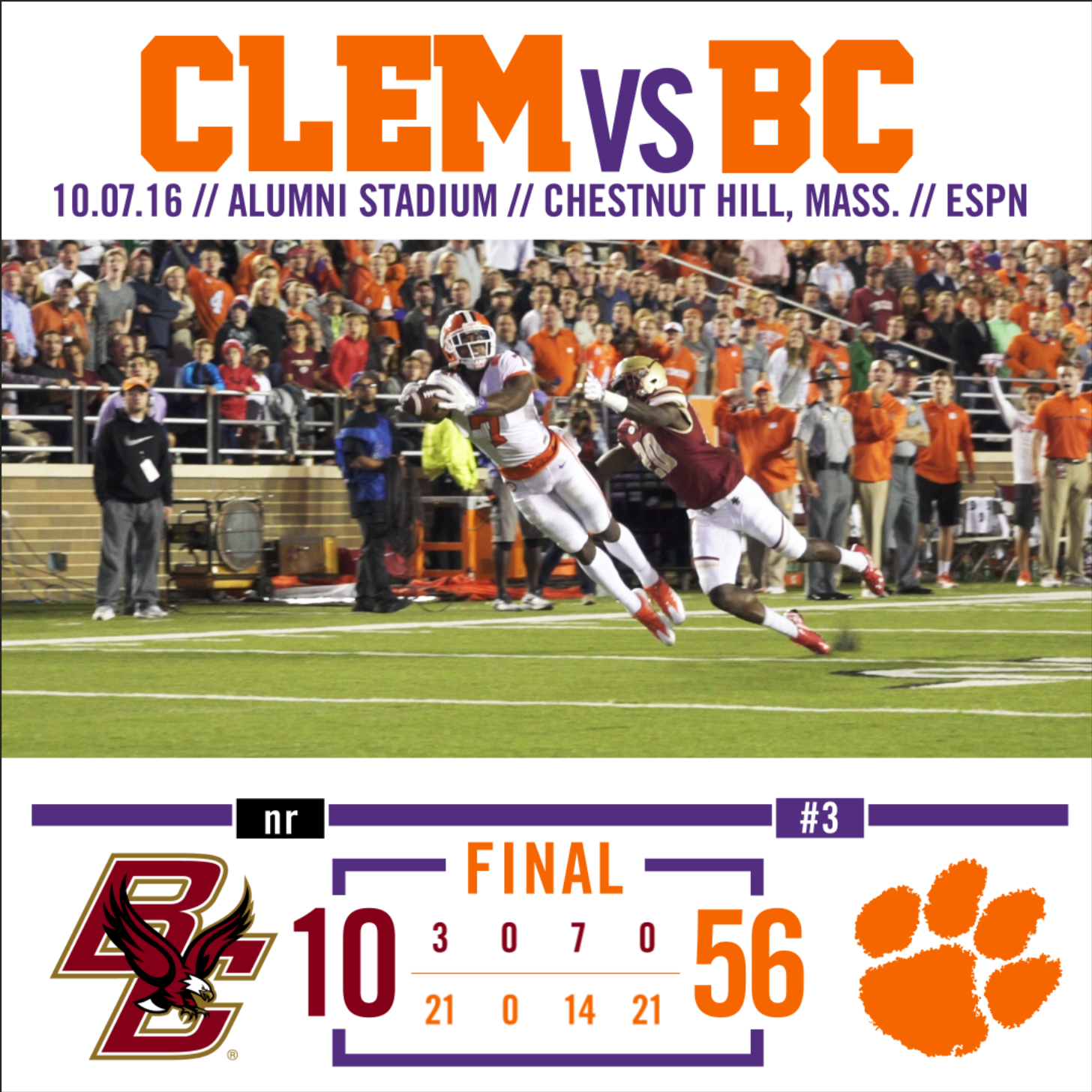 CHESTNUT HILL, MASS. — Third-ranked Clemson followed up its big victory over Louisville with a convincing 56-10 win at Boston College in front of over 44,000 fans at Alumni Stadium on Friday. The win moved the Tigers to 6-0 on the season, while dropping the Eagles to 3-3.

Deshaun Watson was brilliant for the Tigers, tossing four touchdown passes and directing a Tiger offense that finished with over 500 yards of total offense despite a lopsided margin in time of possession a second straight contest. Watson’s favorite target was Deon Cain, who again caught two touchdowns for the Tigers. Wayne Gallman surpassed the century mark on the ground, despite only nine carries, in an efficient offensive effort. Gallman won the Leather Helmet Award following the contest, an award presented annually to the game’s best player.

Clemson led 21-3 after a quarter of play, thanks to three explosive plays of at least 50 yards. Gallman burst through a hole, led by Watson’s key block, en route to a 59-yard touchdown after the Tigers had surrendered a field goal on BC’s second possession. One drive later, the Tigers added another 50-yard play on a reception by Mike Williams. He followed with a touchdown a few plays later on a fade pass. Jordan Leggett capped the quarter with a 56-yard catch and run.

Watson struck quickly after halftime, connecting with Cain on a pair of scores to push the lead to 35-3 midway through the third. The Tigers were on cruise control the rest of the half. Three quarterbacks played in the second half. Kelly Bryant directed a scoring drive when freshman Tavien Feaster burst through the left side for a 45-yard touchdown scamper. Clemson was not done, though, as Mark Fields jumped a BC pass the next possession for an interception and returned it for a touchdown to provide the final scoring margin.

The Tigers return to Memorial Stadium next week to welcome NC State for Homecoming. The Tigers and Wolfpack are set for a noon kickoff.