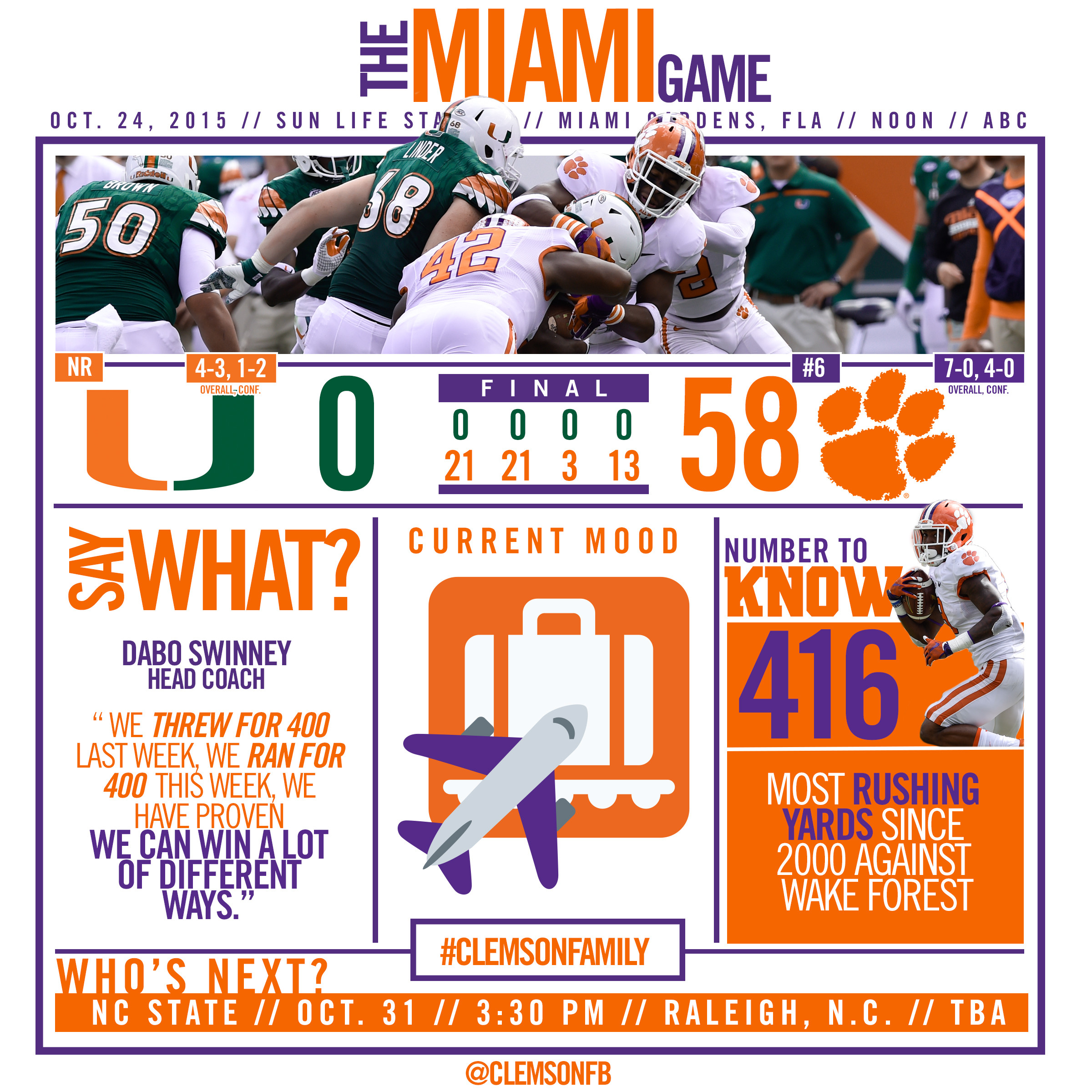 MIAMI GARDENS, Fla. – The sixth-ranked Clemson Tigers tied the program record for victory margin in an ACC game after defeating Miami by a score of 58-0 in Sun Life Stadium on Saturday. The Tigers led 42-0 at intermission, and never looked back in moving to 7-0 (4-0 in the ACC) on the season. Miami fell to 4-3 overall, 1-2 in league play.

Wayne Gallman and Deshaun Watson led a heavy rushing attack Saturday afternoon, as the Tigers accumulated a season-high 567 yards versus the Hurricanes. Clemson rushed for 416 yards, its highest total since 2000 against Wake Forest.

Watson accounted for 241 total yards, including 98 on the ground. He was able to watch comfortably from the bench in the third quarter after the lead reached 45-0. He threw for a touchdown and scored one with his feet. Gallman ran for 118, his fourth 100-plus rushing yardage effort of 2015.

The Tigers jumped out to a quick 21-0 lead in the opening quarter behind a fluid offense and suffocating defense. Watson threw a 34-yard touchdown to Jordan Leggett on the opening drive, Leggett’s tight end school-record fifth straight game with a score. Watson set the Tigers up for a second touchdown after unleashing a career-long 63-yard run that led to Gallman scoring from five yards out. The third score was put on the board when Zac Brooks got in on the action, scoring on a one-yard plunge.

The Tigers duplicated the feat with 21 more points in the second frame. It culminated when Watson scampered in from six yards out, and then Cordrea Tankersley picked off the next offensive play by the ‘Canes that pushed the advantage to 42-0. Tankersley’s pick was his third of the season, most by a Tiger.

The second half featured a ton of players by Clemson on both sides of the ball. Backup quarterback Kelly Bryant was a highlight, scoring on two touchdown runs to continue and build the Tiger cushion. Bryant scored on a 59-yard run, his longest of the season.

Clemson returns to action next weekend at NC State. The Tigers and Wolfpack will meet at 3:30 p.m. at Carter-Finley Stadium in Raleigh.