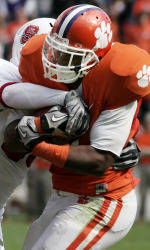 The Tigers (5-4, 3-3 ACC) fumbled five times, losing two of them, threw an interception, had a touchdown called back on a holding penalty and missed two short field goals.

The Clemson defense was outstanding, holding the Wolfpack (6-3, 3-2) to 275 yards and dealing a big blow to North Carolina State’s hopes to win the ACC’s Atlantic Division.

The win also kept alive the Tigers’ faint hopes of returning to the title game.

Jamie Harper’s 3-yard TD run provided the go-ahead points with 6:18 to go, but the Tigers couldn’t run out the clock after the Wolfpack managed just a 4-yard punt trying to pin Clemson inside its 20. North Carolina State managed only one first down after getting the ball back, though, and Russell Wilson’s pass down field on fourth down was dropped by T.J. Graham.

The Clemson running game struggled for just 46 yards with leading rusher Andre Ellington out with a toe injury, and it was an ugly game throughout: two touchdowns called back for penalties, two interceptions, seven fumbles (the offense managed to recover four of them), two missed field goals and a blocked field goal.

The Wolfpack got inside the Clemson 20-yard line five times, but only managed 13 points.

Marquan Jones had six catches for 47 yards and DeAndre Hopkins caught five passes for 90 yards and a touchdown for Clemson.

The game got off to a promising start for the Wolfpack. Wilson accounted for all but four of his team’s 58 yards as they took a 7-0 lead on Wilson’s 3-yard TD pass to running back Mustafa Greene.

The half ended with Clemson driving to the 13 before having a TD called back for holding. Parker was then sacked twice, leaving the Tigers offense scrambling to run one last play on 4th-and-37 as the rest of the team started jogging off the field.

Josh Czajkowski had field goals of 28 yards and 27 yards, but Clemson blocked a 30-yard try in the second quarter.