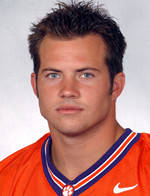 Tavaghn Monts and Michael Hamlin had 11 tackles apiece and defensive ends Gaines Adams and Charles Bennett both had sacks to highlight the defense, which had five sacks and three turnovers combined on the afternoon.

The Tigers scrimmaged for two and a half hours in Clemson Memorial Stadium before an estimated crowd of 17,500 orange clad fans. The offense wore orange and the defense wore white. There were no defended kickoffs of punting situations. The scrimmage concluded Clemson’s spring practice for 2005.

While the Clemson offense scored 40 points and had an even 500 yards passing, the number-one defense did not allow the number-one offense to score a touchdown. Grant and running back Reggie Merriweather each scored a pair of touchdowns for the number-two defense.

Proctor’s passing yardage total was the most in Clemson spring game history, breaking the record of 240 passing yards by Willie Simmons in the 2001 Spring Game. At one point Proctor completed 13 consecutive passes. His completion percentage of 78.3 percent was also a Spring Game record for a minimum of 20 attempts. Proctor threw three touchdown passes, scoring strikes of four and 15 yards to Grant, and 30 yards to La’ Donte Harris.

“I was pleased with the progress the team made over the Spring,” said head coach Tommy Bowden. “Coming into the spring I wanted our team to become familiar with the changes in terminology on offense and defense, put the top players on both sides of the ball on the field, and develop leadership. We won’t know for sure until the fall, but I think we made progress in all three of those areas.

“The biggest thing about today was that we didn’t get anyone injured. You always worry about that in a spring game.”

Chansi Stuckey tied a Clemson Spring Game record with 11 receptions for 124 yards. All 11 receptions came on passes from Whitehurst. Grant, playing with the second team, caught eight passes for 146 yards and two scores. He was just four yards short of the Clemson Spring Game reception yardage record of 150 yards by Jack Anderson in 1970. La’Donte Harris also had a strong day receiving with five catches for 60 yards, including the 30-yard catch from Proctor.

Merriweather was the top rusher with 75 yards in 18 carries, while Kyle Browning, who ran with the first team most of the day, had 16 carries for 57 yards. Walk-on Paul Macko had eight rushes for 27 yards and had a 21-yard reception.