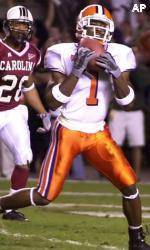 COLUMBIA, S.C. – Charlie Whitehurst tied the school record with four touchdown passes and Clemson’s players made their strongest pitch yet to save coach Tommy Bowden’s job with a 63-17 victory over archrival South Carolina on Saturday night.

Bowden’s future after five Clemson seasons was the week’s most discussed topic. And just three games ago, Bowden looked as good as gone after the Tigers’ 45-17 loss at Wake Forest.

But Whitehurst and the Tigers (8-4) capped a remarkable turnaround with their third straight win, and the sixth in seven years over the Gamecocks (5-7).

Clemson fans chanted Bowden’s name as time wound down. Defensive linemen DeJuan Polk and Khaleed Vaughn carried Bowden to midfield when it was over.

Whitehurst finished 18-of-26 for 302 yards and helped Bowden to his fourth win in five meetings with Gamecocks coach Lou Holtz.

The victory put Clemson in line for the Gator or Peach bowls – a decision that hinges on the Maryland-Wake Forest game next week.

Bowden’s plans should be known more quickly. Athletic director Terry Don Phillips, who issued a statement of support for Bowden and the program on Tuesday, said the two would meet within days to evaluate things.

For the 83,987 at Williams-Brice Stadium, there was nothing to ponder – the Tigers looked great.

Whitehurst, the son of former Green Bay Packers QB David Whitehurst, did most of the damage early on. He had long touchdown passes on Clemson’s first three possessions – 36 yards to Derrick Hamilton, 28 yards to Airese Currie and 39 yards to Ben Hall – and completed his first 10 throws as the Tigers led 21-0 in the opening quarter.

When South Carolina scored 10 straight points in the second quarter to tighten things up, Whitehurst pushed the Tigers to two more TDs. His 22-yard run helped set up Jasmin’s first TD. Then Whitehurst had passes of 28 yards to Kevin Youngblood and 26 yards to Tony Elliott as Jasmin scored with 12 seconds to go before halftime.

In the third quarter, Whitehurst got his record-tying fourth TD pass with a 27-yard toss to Duane Coleman. Whitehurst, a sophomore, has four four-touchdown games in 17 career starts. He also has 21 touchdown throws this season, tying Woody Dantzler’s single-season mark.

South Carolina lost its fourth straight loss, giving Holtz another disappointing end to a promising year. He led the Gamecocks to 17 wins and two Outback Bowl wins in 2000 and 2001. But this was the team’s second consecutive 5-7 season. The Gamecocks fell to 0-9 the last two years in games that could’ve gained them a bowl bid.

South Carolina had hoped to redeem a fading season against Clemson. Instead, the Gamecocks surrendered the most points ever in the rivalry since the Tigers 51-0 win in 1900.

A win was likely to send the Gamecocks to the Music City or Houston bowls. But they never had a chance.

Quarterback Dondrial Pinkins was sacked for an 11-yard loss on their first play. The receivers on all of Whitehurst’s first-quarter touchdowns were wide open. At one point, South Carolina trailed Clemson in total yards, 177 to minus 4.

The 66-year-old Holtz, though, is expected to return for his sixth season. He agreed to a one-year contract extension this past Tuesday that keeps him here through 2008, although either side can void the deal with five-days notice.

Clemson’s closing run this season began Nov. 8 with a dominating, 26-10 win over then No. 3 Florida State, son Tommy’s first win in the Bowden Bowl over father Bobby’s Seminoles – a win picked at Saturday night by South Carolina fans with a sign at the stadium, “Thanks, Dad. Love, Tommy.”

Clemson guaranteed itself no worse than third in the ACC the following week with a 40-7 victory over Duke.

The pressure, though, got to Bowden, who had a momentary lapse of emotion this week when asked if in his heart of hearts he knew what his Clemson future was. Bowden’s lip quivered and his eyes were moist as he responded those questions were better directed elsewhere.

Whether the landmark win over South Carolina is enough for administrators to hold on to Bowden is another question still to answer.