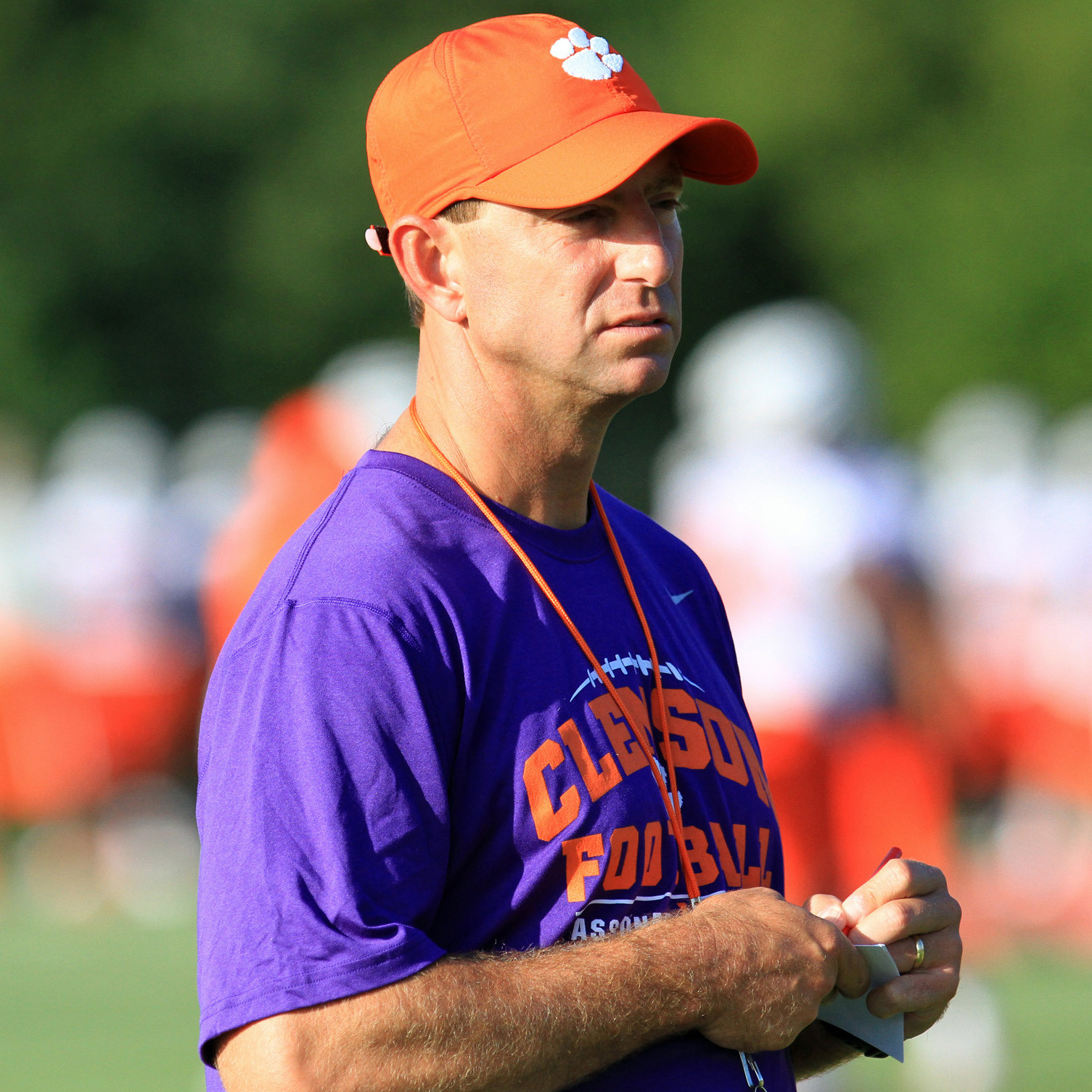 Tigers Back on Practice Fields

CLEMSON, S.C. – The Tigers returned to the practice fields Monday afternoon, the squad’s first workout in 12 days. The team scattered to sites around the country along with the rest of the Clemson student body for Spring Break a week ago last Friday. But the team reported back for an evening meeting Sunday and was ready to go Monday for the seventh team practice of the 15 spring sessions.

Among the highlights was two long receptions in a competitive passing drill by wide receiver Mike Williams.

Clemson has been working on fundamentals for most of the first seven practices, but the team has its first full scrimmage (closed to the public) Wednesday in the stadium.

“Scrimmages are important because we need to evaluate what players will do in certain situations,” stated Swinney. “How will player ‘X’ perform against player ‘Y’ in a scrimmage situation? How will a young freshman react when competing against a veteran player?

“At the end of spring practice, we will have exit meetings with each player and review with them what they need to work on to be better prepared to help the team in the fall. We have two full scrimmages plus the spring game. The scrimmages are important.”

One of the players Swinney commented on after practice was redshirt sophomore running back Tyshon Dye, who played near the end of last season after recovering from a torn Achilles tendon. He played just four games but had 151 yards on 32 carries and scored two touchdowns.

“Tyshon looks very different from the fall,” said Swinney. “I said last fall that he needed a spring and a summer to get back into football shape. He has worked hard in our offseason program in the weightroom and has gotten much more healthy. You can see it in some of his cuts. There are some moves he couldn’t do last fall, but he can now do. He is one of the players we are anxious to see in the scrimmages.”

Swinney also talked about the offensive line after Monday’s practice.

“The first group has had a good spring so far. Isaiah Battle, Ryan Norton, Joe Gore, Eric Mac Lain and Tyrone Crowder are all playing with more confidence. I am very encouraged by what I have seen from that group.

“The second group is talented, but obviously lacks experience. But they have been working hard and are going to get better as we go along. They are hungry, and that is great to see.”

• Freshman offensive lineman Mitch Hyatt was injured in a practice before spring break, but was back full-go today.

• Among the former Tigers at practice Monday were Jacoby Ford, C.J. Spiller and Woodrow Dantzler. Those three former Tigers accounted for 20,469 yards of total offense and all-purpose yards in their respective careers, a figure that converts to 11.63 miles.

• Current Indianapolis Colt quarterbacks coach, Clyde Christensen, was among the visitors to practice Christensen was an assistant coach at Clemson under Head Coach Tommy West in 1994 and 1995.