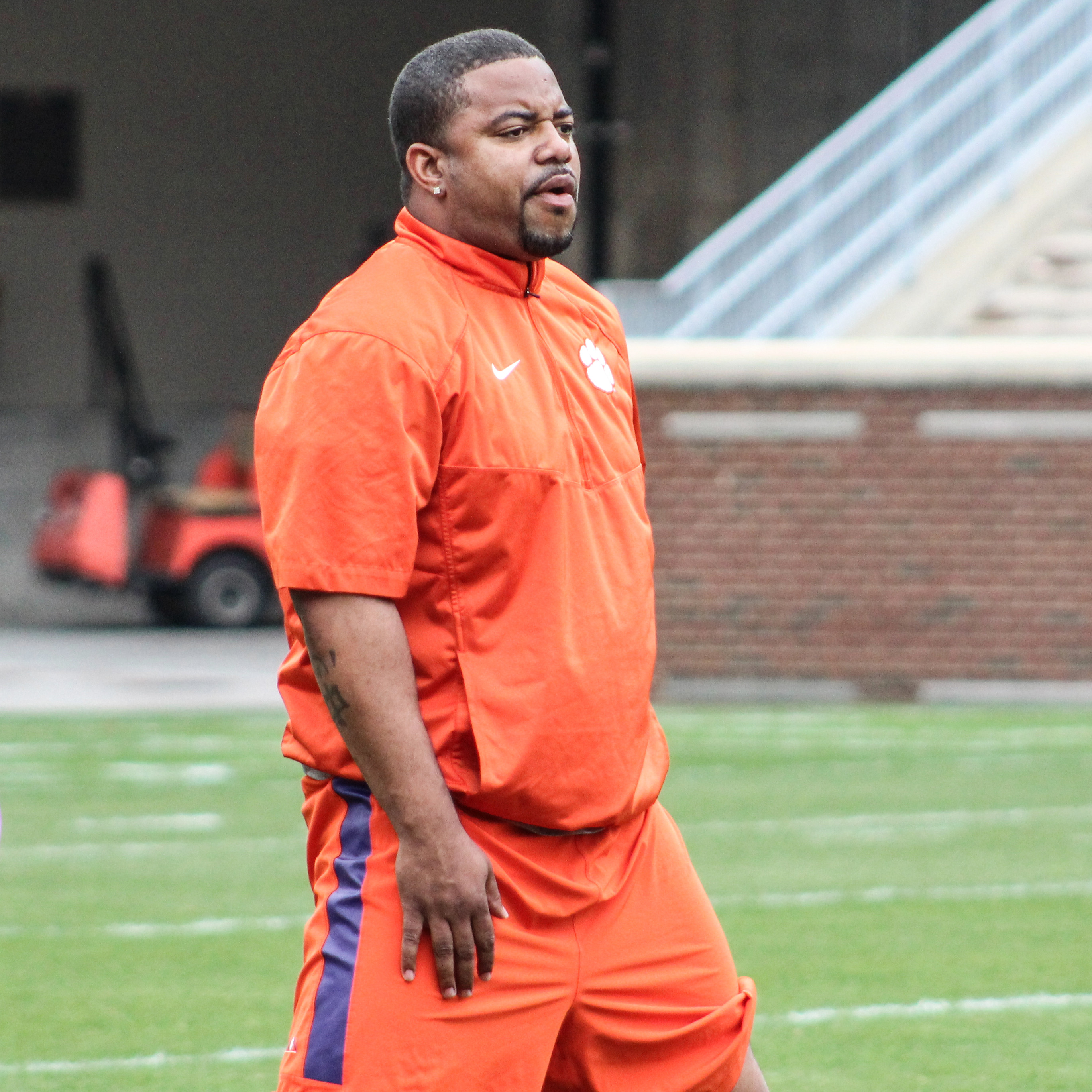 Charone Peake was a young boy at the time, but he remembers the games well.

“My dad’s side of the family is from Union (S.C.), so I was always at Roscoe’s games growing up,” he said. “My older cousin was a receiver on the team when Roscoe was a freshman in high school.”

Roscoe, in this case, is former Clemson and Union High wide receiver Roscoe Crosby, one of the most talented two-sport athletes to come out of the Palmetto State.

After a long and tumultuous journey that included stints at Clemson, minor league baseball and eventually the NFL, Crosby came full circle by returning to school last summer with two focuses — earning his degree and helping mentor the Tigers’ young wide receivers, including Peake.

“He has a lot of knowledge and was a great player at Clemson,” Peake said. “He definitely coaches us up when he sees something.”

Crosby is one of seven former players who have returned to campus as part of the Tiger Trust program, one of the 12 tenets introduced in the Clemson Will in 2014-15. Tiger Trust provides an opportunity for all student-athletes who have exhausted eligibility or left early for a professional career to return to Clemson to earn an undergraduate degree if he or she left in good standing. The athletes receive scholarship assistance through the athletic department and IPTAY.

As camp opened last week, Crosby could be found standing off to the side as co-offensive coordinator Jeff Scott took the wide receivers through a multitude of drills. Crosby was charting every catch, drop and ball in jeopardy to provide Scott as much data as possible from practice.

Crosby has relished the opportunity to be back on the sidelines.

“You don’t meet a lot of people like (head coach) Dabo Swinney,” he said. “I knew as soon as I met him that he was genuine. He reminds me of Coach (Tony) Dungy, who I was around in the NFL. You know he cares, so you’ll run through a wall for him.”

Two of the Tiger Trust participants — Adams and Allen — assist co-offensive coordinator Tony Elliott with the instruction of the running backs. Both played the position for the Tigers.

“Look at Terry, he’s come back to get his degree after a very accomplished professional career, and he’s in his 40s,” Elliott said. “He has great expertise, and he and Dymon help me teach our young backs everything they need to know about playing the position. Plus, having them around further instills what we’re trying to teach our players about never quitting.”

“To be able to come back and relive the memories I had at Clemson, it speaks for itself,” he said. “I’m very proud of the progress within our program. We’re winning, and that’s what I’m used to.”

Swinney is used to winning as well, both on and off the field. In six full seasons, he has seen 114 out of 120 seniors earn a Clemson degree. The other six are either in school or in the NFL.

“These guys are welcomed and embraced by everyone in our program,” Swinney said. “The ultimate goal is to get your Clemson degree. That means more to me than anything, and that’s what the Tiger Trust program is all about.”

And there’s no question in Elliott’s mind that seeing former players from all eras of Clemson football return to earn a degree resonates with the athletes proudly wearing the orange and purple today.

“When you’re young, you think you’re invincible,” he said. “We try and prepare our guys for life after football. They can’t see past tomorrow. Now they see somebody who’s seen the future, who can come back and let them know how to prepare for it.”

Former running backs Dymon Adams (above) and Terry Allen (below) have returned to assist Coach Tony Elliott this fall, while seeking their undergraduate degrees.