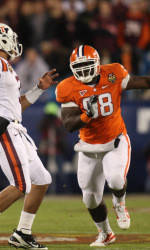 MOBILE, AL – Three members off the Atlantic division champion Clemson Tigers will team up together one final time in the 2012 Senior Bowl. Defensive tackle Brandon Thompson, defensive end Andre Branch and fullback Chad Diehl have all officially accepted invitations to the senior showcase event. The 63rd Senior Bowl is scheduled for 3:00 PM (CT) on Saturday, January 28 in Mobile’s Ladd-Peebles Stadium. The game and all practices will be televised by NFL Network.

“We feel like we’ve identified three outstanding players in Brandon, Andre and Chad,” Senior Bowl President and CEO Steve Hale said. “All three offer a unique skill set that should make them very attractive to the NFL scouts, coaches and GMs here in attendance later this month.”

Branch was a first-team All-ACC pick in 2011 after leading the Tigers in tackles for loss (17) and sacks (10.5), marks that ranked third and first in the conference, respectively. The defensive end was second on the team in tackles (85) and also recorded 17 quarterback hurries. He is tied for fourth in school history with 17.5 career sacks and made at least one tackle in 41 straight games. Branch leaves Clemson with 197 tackles, 33.5 tackles for loss 40 quarterback hurries and 11 pass breakups in 27 career starts.

Diehl helped open holes for Clemson running back Andre Ellington to gain 1,178 yards this season. He also played a key role in a Clemson offense that ranked second in the ACC in total offense, averaging 440.8 yards per game. Primarily used as a blocker out of the backfield, Diehl did gain eight yards on six carries and added another 39 yards on seven catches in 19 career starts. He played in a school-record 57 games for the Tigers.

Tickets for the 2012 Senior Bowl are currently available for purchase at the Senior Bowl ticket office (151 Dauphin Street), all area Food For Less locations, select Regions Bank locations, online at www.seniorbowl.com or by calling (251) 432-4109.