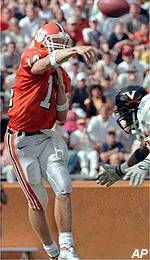 Tommy Bowden earned his first win as Tiger coach and Clemson got its first victory over a top-25 team in Death Valley in three years when the Tigers defeated Virginia 33-14 in 1999. Clemson scored on six of its first seven possessions on its way to building a 33-0 lead in the middle of the third quarter. The Tigers did not punt until midway through the fourth quarter.

Williams does it again…Watch (3.8 MB)