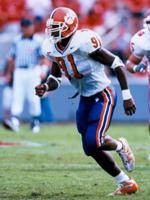 Clemson seized momentum in the second half against Georgia when Bryant McNeal returned a fumble 55 yards for a touchdown to tie the game at the 9:54 mark of the third period. It was the first defensive touchdown of McNeal’s career at any level and first touchdown by a Clemson front four lineman since 1999.

This file is approximately 2.3 MB