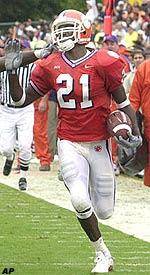 Depsite a driving rainstorm, Derrick Hamilton reigned over Georgia Tech with the best all-around game of his career. A receiver by trade, Hamilton had 97 yards rushing in just five attempts and a 79 yard punt return on his way to 256 all-purpose yards, fifth best in Clemson history. The performance included a 77-yard run in the first period that gave the Tigers a 10-0 lead. It was the longest run by a Clemson player since 1993 when another Derrick, Derrick Witherspoon, raced 89 yards for a score against Maryland.

Hamilton finds paydirt in the mud…Watch

This file is approximately 2.4 MB