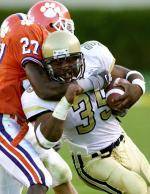 The Greenville Tiger Tailgate Show Stage will be set in front of 130 South Main Street in Greenville, across the street from the Greenville restaurant Soby’s. On Saturday, September 20th, the show will broadcast live from the stage starting at 4:00 PM and will conclude at 6:00 PM.

The show will include giveaway items from American Solutions for Business. Also on hand will be the Carolina Blood Connection which will be accepting blood donations throughout the show. Each blood donor will be automatically entered into a drawing for Clemson-South Carolina tickets. Also, a 52-inch television will be on stage so fans can keep up with games in action.

The Tiger Tailgate will be in Downtown Greenville for the October 4th Maryland, the October 16th N.C. State and the November 1st Wake Forest games.

Sponsors include Soby’s on the Side, Modern Supply of Williamston, Carolina Blood Connection, American Solutions for Business and Courtyard by Marriott of Orchard Park.