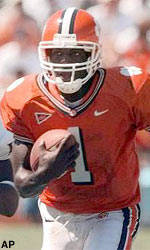 JACKSONVILLE, Fla. – On Saturday, December 30 at 2:15 p.m. ET, Clemson quarterback Woodrow (Woody) Dantzler and senior defensive tackle Terry Jolly will make a special visit to the ESPN.com moderated chat room to talk about their tremendous season and preparation for Michael Vick and the rest of the Virginia Tech Hokies in the 2001 Gator Bowl.

After emerging in late September as a Heisman Trophy candidate, Dantzler fell on hard times as he was sidelined in the North Carolina win with an injury to his lower left leg that hindered his performance the remainder of the season.

The native of Orangeburg, SC had been averaging close to 300 yards a game of total offense prior to the injury, then failed to reach 100 yards in that category in three consecutive games when he was trying to play with the injury. Dantzler will require surgery after the bowl game and he will not be 100 percent for the Virginia Tech game, but he will start.

Dantzler set 16 Clemson records this season, including most total offense (2638 yards), most yards rushing by a quarterback (947) and most touchdowns rushing and passing in a season (23). He ranked 47th in the nation in rushing and 21st in passing efficiency.

When Jolly attended Clemson football press conferences this season the media would flock to his table to hear what he had to say. Jolly is the most outspoken and one of the most personable players on head coach Tommy Bowden’s team.

Jolly was just as exciting on the field in 2000 as he was off it. This first-team All-ACC selection is one of the big reasons Clemson is ranked in the top-20 in rushing defense and in the top-25 in scoring defense heading into the Gator Bowl game with Virginia Tech. For his efforts this season, Jolly has been asked to play in the college all-star game in Orlando.

Don’t miss the chance to chat with these two Tiger standouts! They will not be stopping by until Saturday, December 30 at 2:15 p.m. ET, but feel free to send in your questions now and we’ll save them for their arrival.