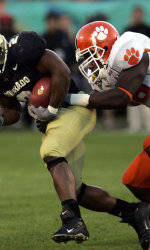 Clemson, SC – Clemson completed its second two-a-day practice session on Monday, two days after scrimmaging in Death Valley and four days after its first two-a-day session. The Tigers worked out for nearly three hours in the morning and two hours in the afternoon. The team dressed in full pads in the morning and in shells in the afternoon when light rains came through the area.

“It rained, but did not effect practice,” said Head Coach Tommy Bowden. “Tramaine (Billie) was making plays all over the field. Rashaad (Jackson) also made plays and stepped up a notch. I have also been really pleased with all the freshman as well.”

Monday marked the first day in camp for freshman wideout Kendrick Johnson, who was cleared by the NCAA Clearinghouse within the last few days. “I had a good first day,” said the Fort Lauderdale, FL native. “I’ve been going over the playbook with Coach (Dabo) Swinney, and watched the guys during practice to try to pick up on things as quick as possible.”

There were no new injuries reported. The team will continue preseason camp with one practice on Tuesday afternoon.