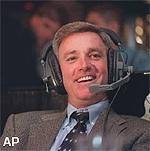 Each week, fans attending “Tiger Calls” will have the opportunity to register and win an autographed football from Coach Bowden. We will give the ball away to one lucky fan in attendance. Tiger fans will also have the opportunity to register for the “Broadcaster for a Day” contest. One lucky person will be selected at the end of the year to become our broadcaster for a day during the Florida St. game on November 12th.

The “broadcaster” will have the opportunity to sit in with Coach Bowden on one of his call-in shows, sit in the booth during the Florida St. game and attend the live taping of the Tommy Bowden Television Show after the game on the night of November 12th. Chick-fil-A of Seneca and Tri-County Ace will be splitting the “Tiger Calls” broadcasts throughout the season. Tri-County Ace will rotate hosting the shows among its four locations in Clemson, Pickens, Walhalla, and Seneca. The “Tiger Calls” broadcast schedule for the 2005 football season is as follows…

Tri-County Ace and Chick-fil-A of Seneca will also serve as the host location for all 17 remaining “Tiger Calls” scheduled to start immediately following the Clemson football season. For more information on “Tiger Calls” please contact Clemson Tiger Sports Properties at (864) 654-5544.