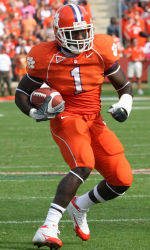 Clemson football freshmen James Davis (RB), Rashaad Jackson (DT), and Phillip Merling (DE) were all named Second-Team Freshman All-Americans by Rivals.com on Tuesday. Clemson tied Texas A&M for the second-most selections with three, trailing only Arkansas’ four. The three have helped the Tigers win five of their last six games and climb to #22 in the latest Associated Press poll.

Davis (Atlanta, GA) has rushed for 729 yards in 10 games despite being hampered with a wrist injury during the second half of the season. That rushing total is also the second-best mark by a freshman in school history. Davis, a two-time National Freshman-of-the-Week by Rivals.com, is fourth in the ACC in rushing yards per game and has scored a team-best eight touchdowns, tied for the most by a Tiger freshman in history.

Despite playing only 271 snaps in 11 games (one start) during 2005, Jackson (Union, SC) has totaled 34 tackles and 6.5 tackles for loss. His one tackle every 7.97 plays is an outstanding mark for a defensive lineman. His tackle total is also the third-highest figure on the team among defensive linemen, and first among defensive tackles. Jackson’s best game was against #25 Boston College on September 24, when he tallied six tackles and two tackles for loss in just 20 snaps.

Merling (Memphis, TN) has played in all 11 games off the bench for a total of 260 snaps, amassing 21 tackles, four tackles for loss, and two sacks. He had six tackles in 47 snaps (both season highs) against #25 Boston College on September 24.