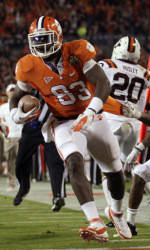 CLEMSON, SC – Sammy Watkins, Dwayne Allen and Andre Branch all were chosen to All-America teams by Sports Illustrated’s website, SI.com on Tuesday. Watkins was named a first-team All-America as a kick returner, while Allen was the first-team tight end. Branch was named second-team as a defensive end.

For Allen, this is his third first-team selection. Earlier he was named first team by ESPN.com and the Football Writers Association.

This is the fourth time Branch has been named a second-team All-American. He also made second team according to CBSsports.com, Rivals.com and the Walter Camp Foundation.