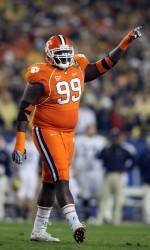 CLEMSON, SC – Clemson defensive players DeAndre McDaniel, Da’Quan Bowers and Jarvis Jenkins are all on the preseason Bronko Nagurski Watch List. The list is published by the Football Writers Association of America, and that organization will select the award that is given to the National Defensive Player of the Year. Finalists will be announced in November and the winner will be announced in Charlotte on December 6.

Clemson was one of three schools nationally to have three players on the 74-player list. The Tigers were joined by Texas and North Carolina. Clemson will play at North Carolina this year on October 9, so six Nagurski Watch List players will be in that game.

McDaniel is one of the top candidates for the award, as he is a returning first-team All-American by the Football Writers Association. Last year as a junior the safety had eight interceptions and 102 tackles. The interception total was tied for third in the nation and he was the only player in college football last year with at least eight interceptions and at least 100 tackles. He was the first player in Clemson history to do both in the same season.

Bowers is a junior who had 58 total tackles, including 11 tackles for loss in 12 games. The defensive end missed most of three games last year with an injury, but came on strong at the end of the year to help the Tigers to a final top 25 ranking and the ACC Atlantic Division title.

Jenkins was an honorable mention All-ACC selection as a defensive tackle last year. He had 69 tackles, tops on the team among defensive linemen, and he added 11 tackles for loss. Jenkins was a big reason Clemson ranked in the top 25 in the nation in seven different defensive categories last year, including total defense and scoring defense.

Clemson has not had a player win the Nagurski Award. Gaines Adams was a finalist in 2006.