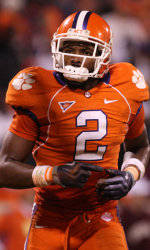 McDaniel had 48 votes on the 52 ballots that were cast, more than any other player, offense or defense. The senior from Tallahassee, FL, had eight interceptions and 102 tackles last year, the only player in the nation with at least eight interceptions and 100 tackles. He was first-team All-American as a junior by the Football Writers Association and a first-team All-ACC performer at safety.

Jenkins will join McDaniel on Clemson’s defense this year. The native of Clemson was an honorable mention All-ACC pick last year when he had 69 tackles, more than any other Clemson defensive lineman. He was fifth on the team in tackles overall and his 11 tackles for loss ranked second behind Ricky Sapp.

Hairston was a second-team All-ACC selection as an offensive tackle last year when he helped create holes for Clemson’s highest scoring team in history on a total points basis (436). He started 12 of the 14 games last year and Clemson had a 9-3 record in those games. The native of Winston-Salem, NC had seven knockdown blocks and an 85 percent grade in Clemson’s 40-37 overtime win at Miami last year. He has started in each of Clemson’s last three bowl games.