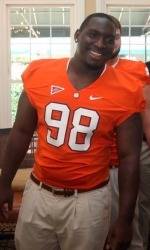 PINEHURST, NC – When Brandon Thompson first walked into the Carolina Hotel at the luxurious Pinehurst Resort in Pinehurst, NC Sunday afternoon, there was something noticeably different about him.

“I guess you can say I’m a little trimmed up,” said the rising senior when asked what was different about him just before he sat down with the media as part of the 2011 ACC Football Kickoff.

Thompson has trimmed up. In fact, he has shaved off nearly 10 pounds over the summer. Though he is listed at 310 pounds in the Clemson media guide, Thompson admitted he is somewhere between 300 and 305 pounds.

“I feel like throughout my career I have been in shape, but not football shape,” he said. “My goal this summer was to get in football shape. I have been pushing myself and doing a lot of little stuff on my own. I have done just a little extra stuff. I have gotten better, and I’m almost where I need to be.”

Thompson has always been productive. In his three previous years at Clemson, he has started 25 of the 39 games in which he has appeared in. During that time he has register 131 tackles, 14.5 tackles for loss, two sacks and 29 quarterback pressures.

By any standard, those are good numbers. But if Thompson and the Tigers want to make a run at the ACC Championship, the Thomasville, GA native knows he is going to have to do a little more to make it happen.

Clemson’s depth at defensive tackle is a question mark as freshmen such as Jarvis Jenkins – a second round pick by the Washington Redskins – and Miguel Chavis on the inside.

Rennie Moore now moves into Jenkins spot, while Tyler Shatley will back up Thompson. According to Thompson, Shatley is the only one other tackle that can play the nose guard position when the Tigers’ incorporate their 3-4 schemes.

“(Jarvis) is my boy. I love him to death,” Thompson said. “I’m going to miss him. But, he has moved on to bigger and better things, and I’m going to keep pushing him.

To help with depth, redshirt freshman Tavaris Barnes is pushing both after he was moved from the defensive end position to inside during spring workouts. Barnes stands at 6-3, 265 pounds.

“We do have a depth issue and it is anybody’s game,” Thompson said. “We have a certain amount of people who are going to travel. I don’t know who is or who isn’t right now, but it is a pretty even race. They have to finish this summer.”

As for Thompson, he is poised to have a big senior season. Nicknamed “Yams” by former teammate Jock McKissick because he dislikes them, Thompson has been projected by cbssportsline.com as the No. 1 senior defensive tackle prospect in the 2012 class. He has also been named a second-team All-ACC preseason selection by Athlon Magazine.

“That means a lot, but at the same time it means nothing,” Thompson said. “It isn’t about how you start, it’s about how you finish. I’m just going into this season, the same way I go into every season. I want it. I want to be the best. I practice like it and I prepare for it.”

And according to Thompson, it is that simple.

Except now, Brandon Thompson is a little bit trimmer.