Thompson played the first four games of his freshman season before a slipped disk in his neck ended his season early. He saw action at the inside linebacker position against Western Carolina and played special teams against Florida State, Wake Forest and Virginia.

“I ended up not playing the rest of the season,” said Thompson. “That spring I was having a really good spring, and I ended up blowing my knee out.”

He suffered a torn ACL – an injury which usually needs six to eight months of rehabilitation. Thompson had reconstructive knee surgery in March of 1996 and began his rehabilitation.

“I stayed here all summer to do rehab,” he said. “I averaged about two or two and a half hours of work a day in the rehab center, plus I had to spend time at home doing exercises and pulls.”

Instead of the typical six to eight months, Thompson was ready to return to the field four months later, just in time for the season. “I was pretty much 100 percent and I felt good so I went ahead and played,” said Thompson.

Since his injury, the Jacksonville, FL native has played in 29 consecutive games. During his sophomore season Thompson was mainly a part of the special teams, but he did see action as an inside linebacker in four games.

His best performance came against Maryland, when Thompson only played four snaps and recorded three tackles. He had two tackles for loss in the game, including the first sack of his career. Also that season, Thompson had a 10 yard kickoff return against South Carolina.

Just prior to the start of his junior season, Thompson made the move from inside linebacker to fullback.

“I’ve always been a linebacker at heart, and fullback is pretty much the same thing,” he said. “It’s a position where you’ve got to go in there and try to attack people.”

Thompson admits the move was a good one. “It’s been good for me,” he says, “because I was getting stagnant at linebacker. I played fullback in high school, so I felt comfortable with the move.”

He played fullback in six games last season, joining Michael Allen as the only players on the current team who have lettered on both sides of the ball. In the first game of the 1997 season, Thompson had one carry for five yards. He also continued playing special teams, finishing the season with five special team stops, including three against Auburn in the Peach Bowl. He had one kickoff return of 16-yards against Georgia Tech.

Football was the main reason Thompson came to Clemson, but it wasn’t the only reason. “Football is always your first major coming out of high school,” he says. “You’re young and you don’t know any better. Football is the only thing that’s on your mind.”

Clemson’s strong tradition also drew him toward the school, plus the chance for academic success. “I went and visited Vickery Hall,” he said. “I told myself that this could help me get through school, and I knew I would need some help because of the long hours I put into football.”

The atmosphere surrounding the town was another strong point. “It’s not often that you find a university right on the lake, where you have all the activities you can do on the lake,” said Thompson. “It’s a great place, and I felt comfortable here.”

One final selling point for Thompson was the chance to remain on the same team as Fletcher High School teammate Rahim Abdullah, who Thompson has known since he was seven years old. “We played Pop Warner ball together and we have grown up together,” he said. “Rahim is an experience to be around, so coming up here with him made it a lot easier for me,” said Thompson. “We had talked in high school about maybe getting a chance to play college football together. We’ve known each other for a long time, so coming up here together made the transition for both of us a lot easier. It has been good for both of us to have somebody to talk to when things weren’t so good. It’s been fun, too.”

Thompson is beginning to look to the future. He will graduate in December, having earned his management degree in three and a half years. He plans to begin graduate school at Clemson in January. “I’m still trying to find out what I want to do,” he says.

Thompson eventually sees himself being an entrepreneur and owning his own company, but he isn’t sure what kind of company. He hopes to use the first semester of graduate school to determine whether to enter the business world or continue furthering his education.

“By the time I get out of school, there’s no telling what will be the newest thing,” he says. “If I don’t own my own company, there are a lot of other opportunities I haven’t even tapped into.”

When he looks back over his experiences as a Tiger, one stands out that made the biggest impression on him. “Definitely the bus ride to the hill is something you will never forget,” he says without hesitation. “With all of the fans yelling and screaming – that’s the best part. The best part is getting to the top of the hill and hearing the cannon go off.”

As for the rest of the season, Thompson says the team is prepared.

“We’re looking to really step up,” he says. “We’ve had our problems and set backs in the beginning of the season, and we’ve gone back to the drawing board and just tried to work hard. We’re going to try to come back and make the season the best possible.”

Thompson is one that can definitely teach the team about comebacks. 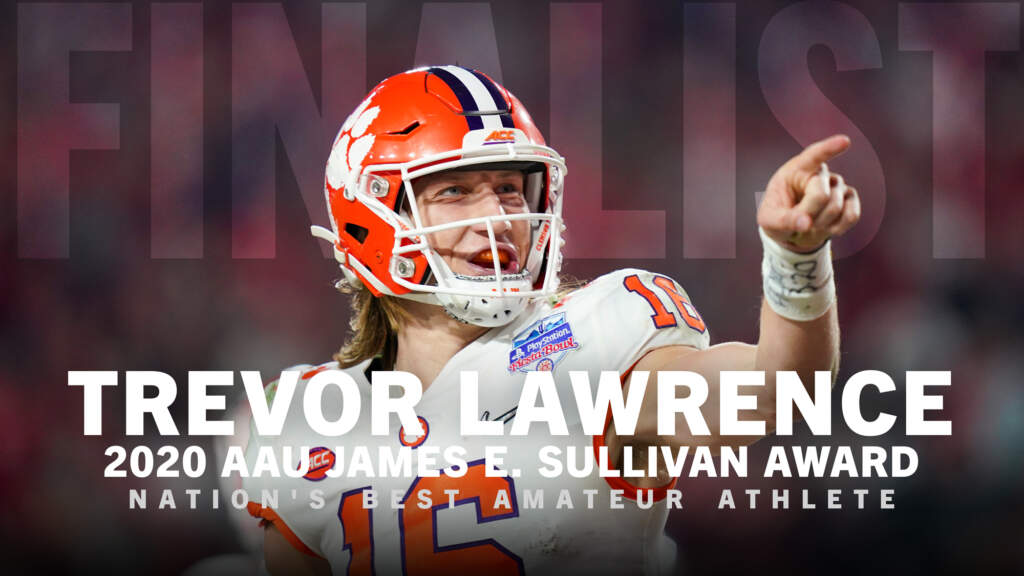